Posted in Reviews by Tyrone on November 2, 2020 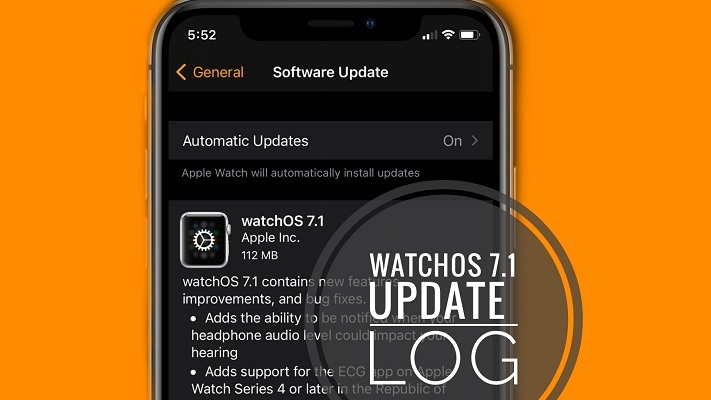 watchOS 7.1 is the next software update for Apple Watch. Its release is imminent, because the Golden Master version has just been rolled out to Beta testers. A GM version is a ‘Release Candidate’ software update and in most cases identical with the public release.

Update (November 5): watchOS 7.1 has been released for all compatible Apple Watch models!

The watchOS 7.1 GM comes with the full changelog of the public release! Apple informs that this update “contains new features, improvements, and bug fixes.” The most important new feature is represented by the new Noise app notifications that will be now triggered if the audio level of your headphones is too loud and could damage your hearing.

The same feature is already available on the iPhone. since the public release of iOS 14.

Below you can find the full update log of this software update:

“watchOS 7.1 contains new features, improvements, and bug fixes.
– Adds the ability to be notified when your headphone audio level could impact your hearing
– Adds support for the ECG app on Apple Watch Series 4 or later in the Republic of Korea and Russia
– Adds support for irregular heart rhythm notifications in the Republic of Korea and Russia
– Resolves an issue that prevented some users from unlocking a Mac with Apple Watch
– Fixes an issue where the screen may be dark on wrist raise for some Apple Watch Series 6 owners.”

Apple doesn’t announce in advance when a public release is due. However, with the Golden Master already live, the public release is imminent. The Cupertino-based tech giant is famous for issuing software updates Tuesday and Thursday. When we’re talking about important updates new iOS and watchOS versions are released simultaneously. Considering that the iOS 14.2 GM has been already rolled out since Friday, tomorrow, November 3 could be a plausible day for the watchOS 7.1 public release.

Fact: You can also debate that iOS 14.2 ‘Release Candidate’ was rushed out to fix the ‘A new iOS software update is now available’ bug. Considering that November 3, is also presidential election day in the USA, Apple might skip this Tuesday update. Next potential release dates are Thursday, November 5 and further on we have Tuesday, November 10.

Important: November 10 matches Apple’s ‘One more thing’ event that will reveal the new Apple Silicone Mac and will also cause the public release of macOS 11 Big Sur. Will Apple release iOS 14.2, watchOS 7.1 and macOS Big Sur simultaneously on Thursday, November 10?

What do you think? Share your opinion in the comments section available below.

Related: watchOS 7.0.2 is the current Apple Watch OS version, unless you own an Apple Watch Series 3 that exclusively received watchOS 7.0.3 with a fix for the unexpected restart bug.

Last Updated on November 5, 2020 by Patricia