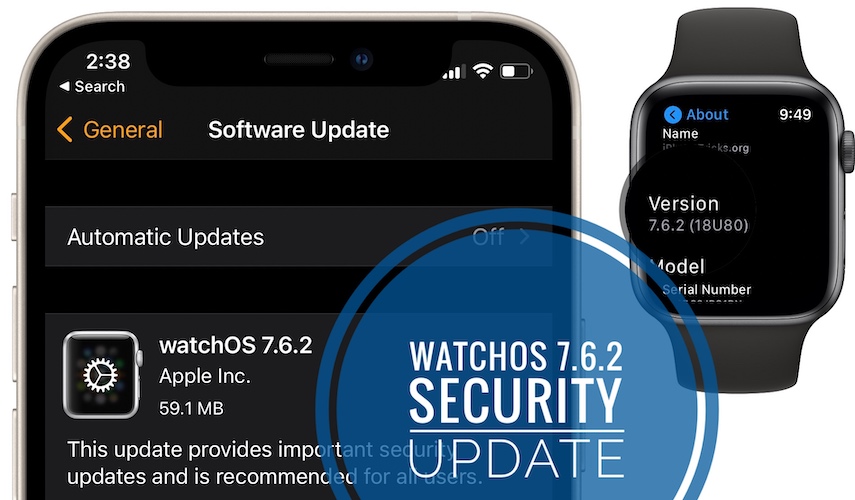 Apple has released watchOS 7.6.2 update with build number 18U80. It brings important security fixes to the Apple Watch. This software update is available for the Apple Watch Series 3 and later and comes along iOS 14.8 and macOS Big Sur 11.6. 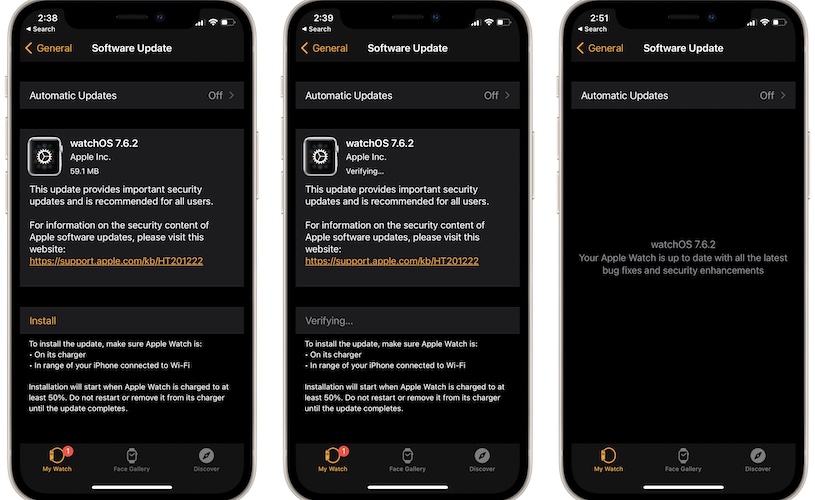 You can download and install watchOS 7.6.2 in the Watch app on the paired iPhone. The update is available over-the-air in the My Watch tab.

Browse for General -> Software Update and use the Download and Install option to update your wrist-worn Apple gadget to the latest version. Provide Passcode and be patient until the 59.1 MB large update file is deployed on your device.

Fact: The Apple Watch has to be in range with the iPhone and connected to the charger. Both devices have to be on the same Wi-Fi network. The installation begins only when the AW battery is 50% or higher.

Apple informs that this release comes with ‘important security updates’ and recommend all users to install it.

The watchOS 7.6.2 security content support document confirms that the same security vulnerability patched in iOS 14.8 and macOS Big Sur 11.6, was also addressed for the Apple Watch.

According to the Cupertino-based tech giant “a maliciously crafted PDF may lead to arbitrary code execution”. The company confirms that the security flaw might have been actively exploited and this is why the update is highly recommended.

To patch this security bug “an integer overflow was addressed with improved input validation”.

Apple doesn’t mention any new features for this release. However, minor changes might still be noticed. If you spot anything don’t hesitate to let us know and we will update it here.

No major bugs have been reported so far. Any new bug or known issue will be updated here.

Have you installed the watchOS 7.6.2 update? What’s your feedback? Did you notice any changes? What about bugs? Use the comments section to share your feedback.

Related: watchOS 8 is the next major Apple Watch software update, expected to be rolled out in the next few days, alongside iOS 15.