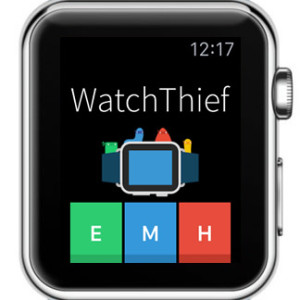 Are you ready to protect your Apple Watch from four relentless thieves? If so, you should give WatchThief a go and install it on your watchOS device. Justin Lennox has developed a simple but addictive little game that can be played only on the Apple Watch. It’s about for thieves that attempt to steal your wrist-worn gadget, while you’re not paying attention. So, whenever you flick your wrist back and forth, the Watch’s display turns on and off, allowing the thieves to make their moves. Check your screen as soon as possible and notice how the burglars act. Unmask the leader before it’s too late!

The WatchThief gameplay requires you to identify the robbers leader. The rule that you have to always have in mind is that the thief leader, never moves backwards. The muggers on your screen can move forward, backwards, stand still and even swap places, but the thief in command never retreats. You have to tilt your Watch back and forth to close and light up the display. Notice how all four thieves move and pick the gang leader before he’s able to steal your Watch! 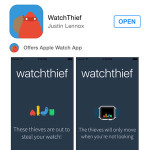 As with any app that comes with Apple Watch support you first have to install WatchThief on the paired iPhone. Next, you need to open the Apple Watch app on your iOS device and go to the My Watch view. Here, scroll for the third party apps list and tap on WatchThief. It should be all the way down, because items are listed alphabetically. Now, toggle the Show App on Apple Watch knob and the software will be uploaded on your wrist gadget. Of course, that you have to make sure that the two devices are Connected and within Bluetooth range. 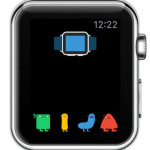 1. Open Game: Flick your wrist and press on the Digital Crown until you reach the home screen app bundle. Next, tap the WatchThief icon and launch the game.
2. Pick Difficulty: You can choose between: Easy, Medium and Hard. The thieves movement gets more complex the more you increase the difficulty level. On Easy mode, characters move only forwards, backwards or are stationary. Medium ads multiple movements during a turn, while Hard enables thieves position swapping, making tracking much more difficult. The turns it takes the thief leader to steal your Watch is also reduced the higher the difficulty! 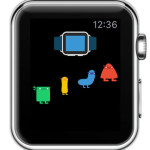 3. Track Movement: After you tap on E, M or H, the game starts. Now you start training your wrist and forearm and tilt your watch back and forth. Each time the accelerometer sensor in your Apple Watch detects movement, it will turn the display on and off. It’s the same technique used for the Activate on Wrist Raise feature.
4. Identify Thief Leader: Each cycle shows a movement pattern of the thieves pack. You have to pick the leader by using the elimination method. The robbers have different colors and are easy to spot. Whenever you see Igvar (Yellow), Bjork (Green), Svet (Red) or Blue (Klemens) move backwards, it means that the burglar is question is not the thief and you can stop monitoring him. 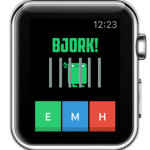 Focus one the remaining options until you can pinpoint the gang’s boss. Tap on him to make your selection. If you’re correct you win and the thief goes to prison. Else, you lose and the score displayed on your iPhone is adjusted accordingly!
5. Play Again: To play another round tap on the desired level of difficulty and the thieves will start to once again to make a move for your Apple Watch! 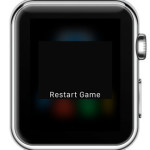 – If one ore more thieves come dangerously close to your Apple Watch, a steal attempt is very close. Buy now you should be oscillating between two suspects. When there’s no distance left between a thief and your Watch, you should know that you’re one turn away from losing your wrist gadget. So, take the gamble, flip the coin and pick one of the two remaining suspects. It’s your final chance of saving the gadget! ;)
– In case you get disturbed during a round you can press firmly on the screen. Force Touch provides the Restart Game option. This way you start again without negatively affecting your score.