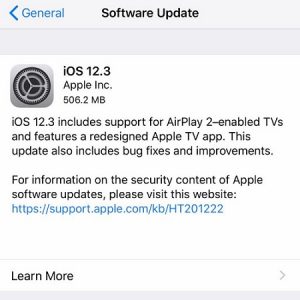 As expected, Apple has recently released iOS 12.3. The main headline is the revamped TV app which now allows users to subscribe and watch third-party media streaming services, like HBO, Showtime, Starz and more, directly from the app. The new feature is available in the Apple Channels section. On top of this, the new TV app becomes accessible for users from many other countries.

iOS 12.3 also adds support for AirPlay 2-enabled TVs, besides the traditional bug fixes and improvements. After updating you can start sharing photos, music and other media directly from your iPhone and iPad to an AirPlay 2 compatible smart TV. More, the Siri Suggestions for watching various movies and TV shows now also display the AirPlay option!

How To Upgrade To iOS 12.3
iOS 12.3 is a roughly 500 MB software update, that can be performed, as usual, over-the-air from the Settings app. All that you have to do is to browse for General -> Software Update and tap on the Download and Install button. Provide Passcode, agree with Terms and be patient until the latest iOS version is deployed and installed on your iPhone or iPad.

AirPlay 2
– AirPlay 2 now supports sharing videos, photos, music and more from your iPhone and iPad directly to your AirPlay 2-enabled smart TV
– One-tap playback automatically plays your chosen TV show or movie on the last screen you used based on time and location
– Siri Suggestions to watch movies and TV shows now include an option to AirPlay
Intelligent suggestions are all done on-device so your personal information stays private

Apple TV app
– The Apple TV app features an all-new design that highlights expertly curated collections and personalized recommendations
– Apple TV channels offer subscriptions to HBO, Showtime, Starz, and more, available to watch directly in the Apple TV app, online or off
– Subscriptions to Apple TV channels can be shared with up to six family members, with no new apps, accounts, or passwords needed
– New release movies are available to buy or rent in the Apple TV app, including the full catalog of over 100,000 movies and the largest selection of 4K HDR titles
– A new dedicated kids section helps you discover editorially-handpicked shows and movies safe for kids of all ages
The Apple TV app can now intelligently suggest playing to the most likely Apple TVs or AirPlay 2-enabled TVs nearby

This update also includes bug fixes and improvements:
– Adds the ability to follow a magazine from the Apple News+ catalog browsing view
– Apple Music’s For You tab now updates multiple times a day suggesting music based on themes like genres, artists, and moods you love
– Disables accessories with insecure Bluetooth connections
– Fixes an issue that could prevent Apple TV Remote from pausing video, controlling video, or changing volume on supported receivers
– Addresses an issue that could cause calls made using Wi-Fi calling to drop
– Fixes an issue where song information from a connected iPhone may not appear in a car’s display