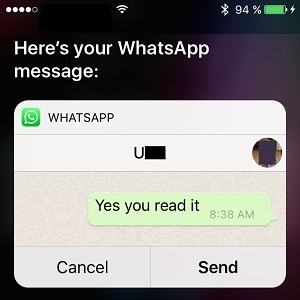 The popular cross-platform instant messaging app has recently issued another App Store update for all iPhone and iPad users. Version 2.17.20 has the role to lineup WhatsApp to the potential of iOS 10.3. It adds further Siri integration, allowing the iOS virtual assistant to speak out unread voice messages. This permits you to continue to focus on driving or whatever else you’re doing, while getting informed about the latest texts from your contacts.

WhatsApp and Siri started working together since the arrival of iOS 10, last fall. You could command the iOS virtual assistant to send voice messages via the Facebook-owned messaging app since September, 2016. However, the ability to read messages is new. It currently works only for the unread texts, but I expect this to be expanded in the future to chats that you’ve already seen.

How To Ask Siri To Read Out WhatsApp Messages 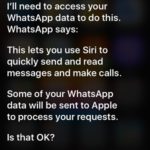 Whenever you have unread texts and are busy doing something that requires your visual attention. You can wake Siri with the help of the Hey Siri command or Home button long press and command the following: “Hey Siri, read out WhatsApp message!”. The iOS virtual assistant will reply that you have an unread text from [contact name], read out the [message content] and mention how long ago the text was received. Last but not least, it asks you if you wish to reply. In case you do, you can dictate a response instantly and dispatch it.
Important: The first time you voice command Siri to complete a WhatsApp task you’re required to grant access to the app’s data, by a prompt on your iPhone’s or iPad’s screen. 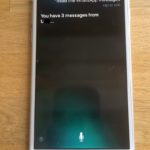 Fact: In case you have multiple unread texts, Siri mentions how many of them are waiting to be read and starts speaking them out in the chronological order.

Info: Even though the WhatsApp messages are read out for you, they still figure as unread when you unlock your iPhone. This means that you have a second chance to check them out in case you did not understand what Siri spoke out for you.

Tip: You can also ask Siri on your Apple Watch to read out texts from WhatsApp. However, the messages won’t be spoken out from your wrist, instead you will be asked to confirm if you want your iPhone to read them out instead. If you do, the command is forwarded to the paired iOS device.

WhatsApp For iOS Update Log
Version 2.17.20 brings a series of other upgrades too, along with this message reading feature. According to the developer the new version is 88,8 MB large and includes support for the Persian language.
It also brings visual changes to the Calls tab, Contacts Info and Group Info screens.
The My Updates view has also received additional functionality. Now you can select multiple statuses at once and forward or delete them.