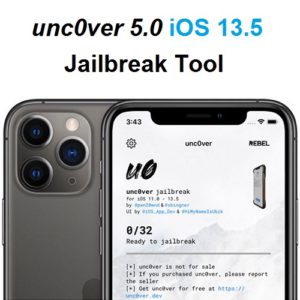 Jailbreaking is a taboo subject for many and we also don’t promote it here on iPhoneTricks.org. However, we can’t stay on the sidelines when such an important breakthrough is announced by the community. The famous iOS hacker “Pwn20wnd” and his team have recently released a new version of the version of the popular update tool “unc0ver”. Update 5.0.0 allows users to jailbreak any signed iOS version from iOS 11 to the recently released iOS 13.5. This is a huge breakthrough for the iPhone jailbreaking community.

The updated ‘unc0ver’ tool is using a zero-day kernel vulnerability which means that the jailbreak is here to stay for at least a couple of weeks, because the hackers haven’t reported the exploit to Apple. It’s been years since a jailbreak has been available for the current iOS version and we’ll have to see how fast Apple can patch this security breach.

Is Jailbreaking Safe?
Hackers use a vulnerability that they discover in the iOS to be able to lift limitations and allow users to install unapproved software (not curated by Apple) on their iPhones. This can open Pandora’s box when it comes to malware on your iOS device, if you jailbreak without knowing what your doing.
According to the ‘unc0ver’ team the jailbreak uses “native system sandbox exceptions” which means that security is unaltered when access to the jailbreak files is enabled.
They also claim that battery life won’t be affected by jailbreaking and promise stability
Tip: If you’ve never jailbroken your iPhone before we suggest you to think twice before attempting it. This can easily go south if you aren’t sure what you’re doing.

How To Jailbreak iOS 13.5
iPhones running the latest iOS version can be jailbroken with the help of the AltStore and Cydia Impactor platforms. macOS users can also use Xcode together with the iOS App Signer to jailbreak.
Because we aren’t aiming to promote jailbreaking and also don’t want to be held reliable if things don’t play out as planned we won’t share a detailed step-by-step jailbreaking tutorial in this article.
However, if you’ve informed yourself from various sources and are determined to jailbreak you can get all the info on the “unc0ver” website. Tap here and scroll all the way down to the Installation Guide. Choose the appropriate operating system and read carefully all the instructions.

2020 Jailbreaking Benefits
Over the year iOS has improved a lot and jailbreaking isn’t as popular as it once was. However, if you like to tune up your iPhone the following features could continue to spark your interest:

Have you ever jailbroken your iPhone? Which are your favorite tweaks? Let us know in the comment section available below!