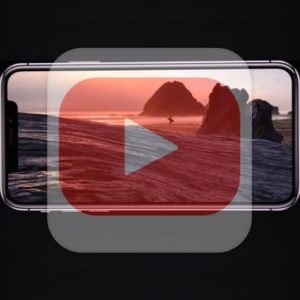 Is your new iPhone X or iPhone 8 getting hot out of the blue? It means that one or more apps are running heavily in the background and using lots of resources. One cause could be a bug of the YouTube app for iOS. Google has recently updated its popular video platform with version 12.43. It brings support for the new bezel-less iPhone resolution, along with the ‘pinch to zoom’ gesture for iPhone X fullscreen mode.

However, it seems that the new update comes with a bug that causes iPhone X and iPhone 8 devices to burn an excessive amount of power during YouTube video playback. The glitch is so serious that it even causes severe battery drainage, in the background, when the app is not use. The problem occurs both on devices running iOS 11.1, as well as on terminals upgraded to iOS 11.1.1, which makes us blame the latest YouTube update.

It seems that the problem surfaces when videos are played in the YouTube app. Affected users have claimed battery percentage depletion as high as 20% for watch-times of a couple of minutes. An explanation could be that the YouTube app is streaming a video format that’s not supported with hardware acceleration by the revolutionary A11 Bionic chip, which powers the iPhone 8 and iPhone X. This causes the devices to decode the videos with the help of software, a method that burns a lot of resources!

Fix For YouTube’s Battery Draining Problem
A fix from Google’s side is expected anytime soon now as a considerable amount of iPhone X and iPhone 8 units are affected. Stay tuned and we’ll updated you as soon as a new software version, that patches the battery draining bug, is available in the App Store. In the meantime your option is to force close the app and restart your device. If the problem persists simply delete the app until a new update is issued and continue watching YouTube videos within the Safari web browser!