Can you Make It Five Nights at Freddy’s?

Are you ready for one of the most popular games in the App Store nowadays? I’m challenging you to last five nights at Freddy Fazbear’s Pizza, without being murdered by one of the in-house animatronics! If you’re a horror enthusiast or a strategy addict you’ll be thrilled by your new job as a security guard at Freddy’s.

Freddy, Chica, Bonnie and Foxy are the main attractions of the Pizzeria. They’re animatronic robots with the main role to entertain customers and make their mealtime more pleasant and relaxing. However, Freddy and his friends are not as friendly during the night. It seems that they have some behavior problems and are likely to attack anyone in the Pizzeria that isn’t wearing an animatroniclike costume.

So, even you, the night guard, aren’t safe between 12 and 6am when the robots are likely to freak out. This is why you’re stuck in your office, hiding from Freddy and his pals. More bad news is the fact that you have limited power reserves. Only a good strategy and perfect coordination will keep you away from the hands of those robots!
Update: Scott Cawthon has released Five Nights at Freddy’s 2 and FNaF 4.

Five Nights at Freddy’s – Gameplay
As a security guard you have to watch the entire Pizza restaurant, with the help of 11 surveillance cameras. They’ll help you determine the last know location of the animatronic robots. When you notice that they are closing in on your office, you have to shut the doors in order to prevent them from reaching you and accidentally murder you, by stuffing you in an animatroniclike costume.
The limited electricity reserves available, make your task much more difficult because you can’t afford to use the lights and close the doors for too long or you won’t have enough power to stay out of reach for the entire night.
I know that this sounds very simple, but trust me it’s terrifying and captivating in the same time!

Freddy’s Pizzeria Camera Layout
Freddie, Bonnie and Chica are normally located on the ‘Show Stage’ and that’s very they start every night. However, they can be anywhere once they start teeming at 12 am. You’ll also have to watch for Foxy, that usually escapes from the ‘Pirate Cove’ and is moving much faster as show stage trio. You literally have seconds to react, when Foxy makes a move for your office. Be ready to close the appropriate door when a robot is visible on the West or East Hall cameras. 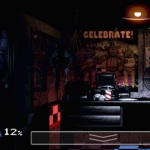 Tips for lasting Five Nights at Freddy’s
– A closed door is the highest power drainer. This is why you should close the West or East door only when a robot is in the immediate vicinity. Check cameras and open the door as soon as Freddy or his friends leave for other rooms.
– You need to use lights because Hall cameras have dead angles. However, flick them on only when the animatronics are nowhere to be seen on the other cameras.
– Use an efficient pattern of scanning the surveillance cameras and stick to your strategy. Try to memorize the last known location of the robots, discover and anticipate their path for more power saving.

Five Nights at Freddy’s – Technical Info
To work as a virtual security guard at Freddy’s pizzeria you need to cede around 41.8 MB of your storage space. Our tests confirmed that the game runs perfectly on iPhone 6, 6 Plus, 5S and 5. According to Scott Cawthron (the developer), it will run nicely also on the iPhone 4 and 4S generations and on any other iOS device that is equipped with at least 512 MB of RAM. It’s customized for iOS 5.1 or later and is labeled as 12+ because of frequent and intense horror/fear themes. If we convinced you to accept the challenge, you can download it now from the App Store!