How To Enable iPhone Caps Lock on iOS 7 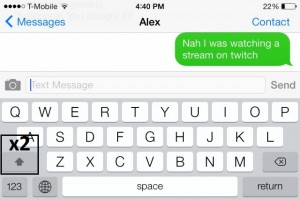 If you’ve just bought your first iPhone or iOS device and wonder how to enable Caps Lock you landed on the right page. Activating it will allow you to capitalize each new letter that you input from the keyboard.

Using Caps Lock is especially helpful when typing passwords which contain a string of capital letters on your iPhone 5s. By default any iOS 7 device capitalizes the first letter of any new sentence. But sometimes you’ll need to type whole words or sentences in capital letters, and thus look for the Caps Lock function to be more efficient.
If you don’t use Caps Lock you have to tap the “Shift” button, which is represented by the upwards pointing arrow, available in the bottom left corner of each iOS keyboard. So, typing a word only in capital letters using the “Shift” button to capitalize each new letter, would require a double amount of work, generated by pressing the arrow before each new input.

How To Enable Caps Lock

With Caps Lock mode you only need to enable it once before typing the capitalized word or sentence. Activation is done by double-tapping the “Shift” button. Once you perform this action, you’ll notice how the Shift-arrow will change its colors and you’ll be able to capitalize each new letter. Returning to lowercase mode is done by tapping the “Shift” button one more time.

Be aware that the “Shift” button, available on your iPhone 5s, has 3 operating modes:
1. Lowercase mode: which is the default mode. Each new letter typed will be lowercase.
2. Uppercase mode: which is activated by a single-tap (x1) on the up-pointing arrow. In this mode only the first letter is capitalized, while the others are lowercased, as uppercase mode converts automatically to the default lowercase mode.
3. Caps lock mode: which is activated by a double-tap (x2) on the “Shift” button of your iOS7 keyboard. Deactivation is done, as mentioned above, by taping one more time on the up-pointing arrow.

Here you can watch a demo of activation and deactivation of the Caps Lock feature on an iPhone 5s.

Related: How to use iPhone caps lock with iOS voice dictation!