Yearly, besides the unveiling of the new iPhones, there is one more highly expected keynote. The release of the next iOS generation. If new Apple flagships impact those that are planning to upgrade or are ready to buy a new iPhone or iPad, a new iOS version impacts the vast majority of Apple customers. This way many of you might be interested to find out more about the iOS 13 release date!

As usual, Apple will roll out its upcoming iOS generation in several carefully planned stages. Because we’ve already experienced a handful of these releases, in the past years, it’s safe to assume that we’re in the position to precisely anticipate the rollout dates of iOS 13. Some of you might already know that the new iOS is always previewed during the Worldwide Developers Conference. This year, WWDC 2019 will take place in San Jose, California, between June 3 and 7. 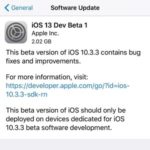 iOS 13 Developer Beta Release Date
Considering that in recent years the new iOS was seeded to Developers right after the end of the keynote of the WWDC inaugural day, we can safely assume that the same schedule will be applied in 2019. However, the initial release will be only available for registered Apple Developers and will continue to be so until the release of the first Public Beta. This is done to provide exclusivity to the new software for the paying developers but also to make sure that the version is safely tested by experienced users, before providing access to a larger audience.
Expected Release Date: June 3.
Time: after 1pm PST / 4pm EST / 9pm UK / 22:00 Central Europe 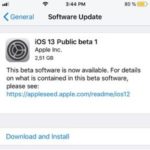 iOS 13 Public Beta Release Date
The Developer beta will reign supreme for at least two weeks. Apple will most likely push a second Developer beta version, right before releasing the first Public one. The two of them should be identical, as experienced in the past. iOS 12 Developer beta was released on June 4 while the Public beta came towards the end of the month.
Expected Release Date: June 24.
Time: after 11pm PST / 2pm EST / 7pm UK / 21:00 Central Europe

iOS 13 Public Release
The beta testing stages will unfold during the entire summer with multiple beta releases for extreme fine tuning. The official release of iOS 13 should most likely occur right after the most important Apple event that takes place in the autumn of each year. In the past mid September was the period for the keynote that unveils the new iPhone flagships. iOS 13 will come along the alleged iPhone XI and iPhone XI Max.
Expected Release Date: around September 12.
Time: after 1pm PST / 4pm EST / 9pm UK / 22:00 Central Europe

Tip: The iPhone 5S is the oldest Apple smartphone supported by iOS 12. Will it survive one more software update, or the iOS 13 compatibility bar will move higher? What about the iPad or iPod touch?

2 Responses to iOS 13 Release Dates For iPhone, iPad and iPod