Apple EarPods Price Discounted To $19 (Not Shipped In The Box)

Posted in Accessories by Patricia on October 14, 2020 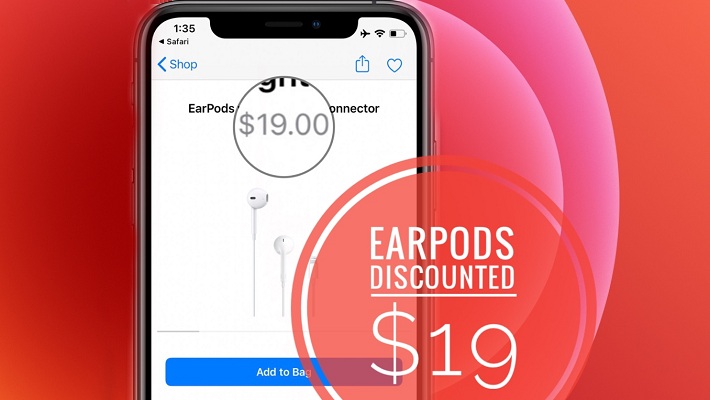 Apple has pulled a major marketing stunt by ceasing to ship the new iPhones with a wall charger and the traditional wired EarPods in the box.

The reason: reducing the carbon footprint. The Cupertino-based tech giant claims that by shipping the iPhones in thinner boxes, saves resources during manufacturing and the shipping process. They claim that the smaller packaging will have the same effect of keeping 450,000 cars away from the roads for an entire year.

The price for this move will be supported by the customers though. The iPhone 12 lineup isn’t cheaper, it starts at the same price with the iPhone 11 models, in 2019. Which means that the savings of not including the charger and EarPods are cashed in by the manufacturer.

To compensate this, the company has discounted the wired earphones! The new Apple EarPods price is now $19! Order them now and save $10, the normal retail price being $29.

The EarPods come with a Lightning connector and a remote control that’s embedded in the wire, which includes Volume controls, pickup and end call functionality and also allows you to change track will listening to music.
According to Apple’s website, the speakers embedded in the EarPods have been designed to maximize sound output and reduce sound loss. This ensures high-quality audio playback.

Fact: The same price discount has been applied to the wall charger. The 20W USB-C charging brick retails for $19. Which means that if you want to buy a full iPhone box you have to spend an additional $38.

Although Apple claims that many users have already switched to AirPods, I am sure that a considerable amount of readers are still using the classic EarPods? Are you among us? Use the comments section available below and let us know!

Related: The decision to stop shipping the charger and EarPods in the box has caused lots of discussions. Memes mocking this move did not take long to surface!