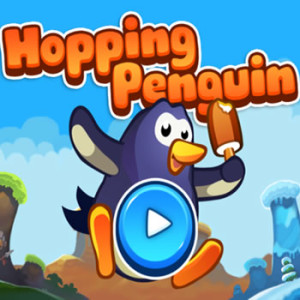 Winter is coming and Hopping Penguin is a new App Store game that will help us accommodate with this fourth season of the year! We can all agree that these polar creatures love ice and thus can be considered big ice cream addicts. But what happens when the evil side steals their favorite food during one dark night? Help the Penguins to reclaim their stolen sweets! Immobile Games, the developers of the Hopping Penguin: Ice Cream Adventure, allow you to control the main character and hop with him through deserted islands in an unendless run for recovering the stolen artifacts.

The Hopping Penguin is an exciting platformer. You have to guide the Penguins through a path of ice. Avoid dangerous obstacles like icicles, hidden enemies like various other animals from the polar region, as well as a continuously changing terrain. Your penguins are continuously on the move. You need to tap the screen whenever a jump is required in order to grab an ice cream, avoid terrain or counteract enemies.

Install Hopping Penguin on iOS
This app can be downloaded on any iOS device running version 6.0 or later. It doesn’t come yet with Apple Watch compatibility but I’m sure that this could be added during future updates. So, if you own an iPhone, iPad or iPod tap here and grab Hopping Penguin: Ice Cream Adventure directly from the App Store. The software is 61.1 MB big and was released only a couple days ago, on October 11. 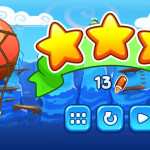 The Ice Cream Adventure is easy to play but also quite intriguing in the same time. As with any other platformer, the developers have included hidden traps and enemies in order to make your artifact collection more demanding. In order to advance on the island’s map you need to complete one level at a time. Depending on how many ice creams you collect, you’re rewarded with stars. You can score either no star, one, two or maximum three. There are also hidden keys that have to be found which will unlock special levels. Collected ice creams can be traded for additional lives or special features! 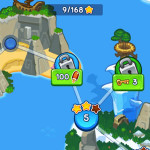 I’ve played along for a couple of hours and here are a few tips that will help you improve your score:
1. Jump: Tap normally to make your penguin jump.
2. Jump higher: If you tap & hold your character will jump higher and thus also longer.
3. Jump Walls: You can tap back-to-back times whenever you land on a wall. This will allow your penguin to jump higher, directly from an incline. If you land on a slope and don’t tap to jump higher, the penguin will slowly slide towards the bottom. Be careful spikes could wait for you at landing spot. 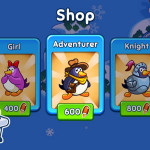 4. Jump Combo: Everything is about running and hopping. If you purchase a power-up you can tap twice in a row and perform a double jump that will considerably increase the velocity and length of your leap!
5. Visit the Shop and trade your ice cream collection for additional characters. You can choose between: Default, Girl, Adventurer, Knight, and Egg.

Fact: There are a lot more other features to discover. But you’ll have to uncover them yourself. I don’t want to spoil the fun completely! Enjoy gaming!