Edit The 3D Touch Sensitivity On Your iPhone 6S 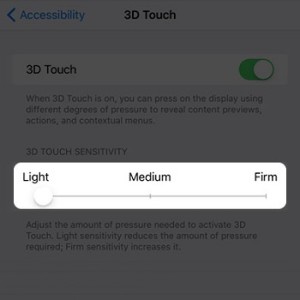 The 2015 Apple flagships have reached worldwide headlines with the revolutionary 3D Touch technology. A system that allows 3-dimensional iPhone inputs, adding depth to the already available length and width, tactile options. This Force Touch feature, borrowed from the Apple Watch, has been greatly improved and customized to unlock a whole new range of actions and menus, for the iPhone 6S and iPhone 6S Plus devices.

With the new gadget’s in our office, we can now inform you that 3D Touch is customizable. A quick scan of the iOS 9 Settings app, revealed a 3D Touch sub-menu. You’ll be surprised that it’s not coming just with the standard ON / OFF knob, but also with an options field called Sensitivity. This setting permits iOS users to determine how hard they need to press, in order to activate the Peek and Pop shortcut.

How To Tweak 3D Touch Sensitivity 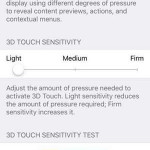 So, if you’re the gentle kind of person you might wanna set your iPhone to recognize a Force Touch after a Light press. Otherwise, if you plan to call the 3D Touch actions only with Firm actions, you should visit the Settings app and increase the Sensitivity. All iPhone 6S and 6S Plus devices ship with default 3D Touch sharpness set to Medium.
Step 1: Grab you iOS device and open the Settings app.
Step 2: Tap on General and search for Accessibility.
Step 3: Now, scroll for the 4th category grouping and tap on 3D Touch.
Step 4: Make sure that the technology is active, and adjust the Sensitivity knob to the desired level. 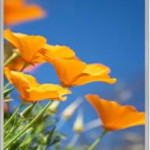 If you’re unsure how hard you need to press to activate the 3D Touch Quick Actions, don’t worry. iOS 9 provides a test panel, right below the Sensitivity bar. Just select the amount of pressure you want to exert and tap on the image with blue skies and orange flowers. The test runs for both Peek and Pop gestures. Press first to preview the image and go deeper to open it in full-screen mode.
My advice is to run this trial for all 3 sensitivity levels: Light, Medium and Firm. After that, you’ll surly know what kind of pressuring suits you best.

Tip: My advice is to pick between Light and Medium. Firmer pushes take more time and might bring risky forces pressing on your iPhone’s display.