How To Take a Screenshot on an iPhone 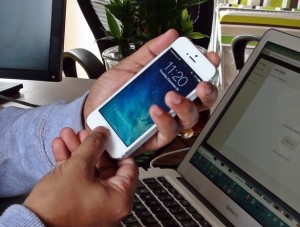 Performing a screenshot on iPhone5s.

With social media at its peak nowadays, knowing how to take a screenshot on your iPhone is mandatory. You never know when you stumble across an image that you want to share with your friends on Facebook, Twitter or Google+. Or perhaps you wish to save something for yourself so that you can check it later even in offline mode. A screen shot is the perfect solution in these situation.

Most of you must already know this. Screen shots are now possible for decades on computers and notebooks Pressing the “Print-Screen” button creates and exact capture of your current monitor or laptop display, which you can deploy in “Paint” or any other photo editor and save it as a picture.
An iPhone screenshot does the same thing. It snatches a picture of your current smartphone screen and saves in the photo gallery for later use.

How to take a Screenshot with an iPhone

There are two ways of snapping your screen using iOS. That’s by using a 2-button combination, or via the help of an App:

1. The first and fastest one is by using a combination of two keys. You need to press the “Home” button along with the “Power” button situated at the top of your device.
Your screen will snatch and the image will be saved and available in your Gallery.

2. The second option to screenshot your iPhone is by using an App designed for this purpose. You can check your App Store and search for “screen capture” or “screen shot”. A number of apps will be listed which perform basically the same task, but you might find a few additional features which could do the difference. For example, performing a screenshot with a single button via the App, instead of the two key combination. If you intend to perform an impressive number screen captures, the app procedure might prove more comfortable.

Be careful to release the two button combination after you notice that the screenshot has been snapped. If you continue to hold them pressed for about 10 seconds, your iPhone will reset. Nothing will be lost though, excepting your precious time!

Related: The iPhone screenshot process has changed during the years. Check here to learn how to screenshot iPhone SE 2 (and all other models built on the iPhone 6 chassis). The iPhone X and all other iPhone models the come without a home button are print-screened this way.