How To Use The New Twitter Quote Tweets Feature

Posted in TILs by Patricia on September 1, 2020 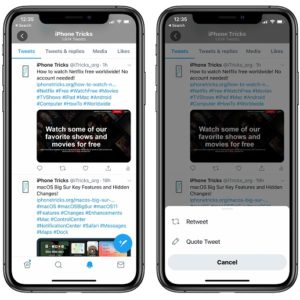 Twitter has released a new feature called Quote Tweets.
It helps you to easier locate and read the ‘Retweets with comments’ of your popular tweets, in a single place.
In fact, the ‘Retweet with comment’ option has been renamed and replaced with the ‘Quote Tweet’ option.

When you open the Quote Tweets section your original content is displayed along with the comment of the re-tweeter.
Quote Tweets can include texts, photos, videos and GIFs. Simply, scroll to browse them all.
You can also interact with a quote tweet and continue the discussion.

How To Display Quote Tweets

1. Open Twitter on your iPhone, iPad or web browser.
2. Tap on one of your tweets to check the reactions.
3. Notice the ‘Quote Tweets’ option available right next to the number of Retweets, in the stats section, displayed below the tweet.
4. Tap it to unveil all the retweets with comments available for your tweet.
5. Scroll to browse the Quote Tweets. You can interact with them and continue the discussion. Like retweet, comment, like or share! 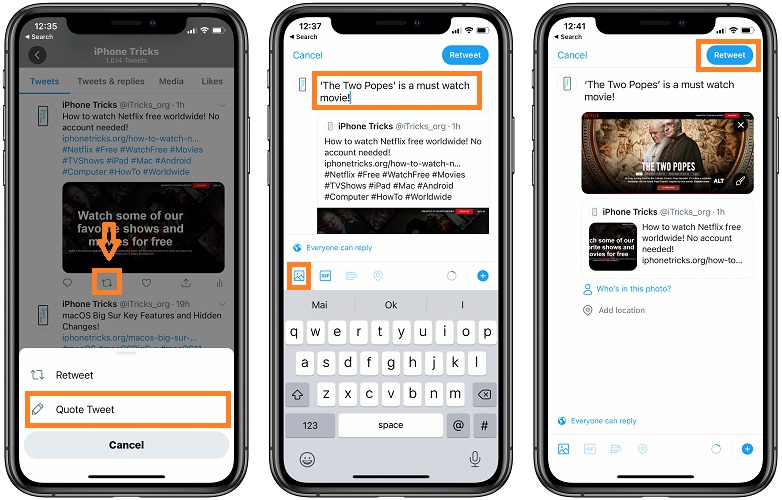 Basically, ‘Retweet with comment’ has been renamed to ‘Quote Tweet’. So, to tweet with a quote (comment) you have to follow these steps.
1. In Twitter, browse your timeline or open a tweet.
2. Tap on the ‘Retweet’ icon.
3. Select ‘Quote Tweet’.
4. Type your comment.
Fact: The first time you use this new feature you’re informed that you can retweet with a GIF, video or photos. You can use the respective icons to add media to your quote.
Tip: If you’re using media in your tweet use the ‘+Alt’ icon to add an image description to aid visually impaired people that use Twitter!
5. Tap on Retweet, top-right corner of the screen and that’s it!

If retweet with comment is one and the same with quote tweet, what’s the difference between them and a retweet?
Retweets are the simple version of Quote Tweets. When you retweet you’re re-posting a tweet and spreading it out to your followers without any additions. This is a simple one-tap action.
However, if you want to add a comment to emphasize or highlight the content of your retweet you have to opt for the new Quote Tweets feature.

Tweets about a Tweet add more to the conversation, so we’ve made them even easier to find.

Retweets with comments are now called Quote Tweets and they've joined the Tweet detail view. Tap into a Tweet, then tap "Quote Tweets" to see them all in one place. pic.twitter.com/kMqea6AC80

Tip: To enable Quote Tweets on your device make sure that you have updated to the most recent Twitter version for iOS & Android!

Do you retweet often? Let us know what you think about the new Quote Tweets feature with the help of the comments section available below.

Related: Do you know that you can limit who can reply to your Twitter tweets?