Posted in Reviews by Patricia on October 1, 2018 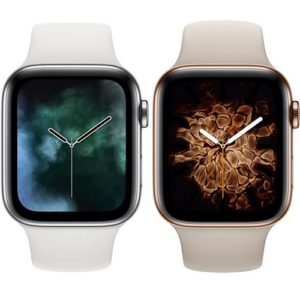 Apple has a habit of including new Watch Faces and Complications in every major Apple Watch software update. watchOS 5 makes no exception!. In this article I’ll showcase for you the new backgrounds and shortcuts, available for all Apple Watch models that are able to run the 5th iOS generation. That goes for all Apple Watches out there excepting the original, first generation smartwatch models.

There are also traditional Watch Faces that have received additional functionality, like the Siri Watch Face which is far more intuitive in watchOS 5. It can provide sports, maps and heart rate content. In collaboration with iOS 12 the Siri theme also supports Siri Shortcuts, a series of suggestions for frequent usage patterns. The great thing is that third party apps are supported, which makes this feature extremely useful.

watchOS 5 New Watch Faces
1. Breathe Watch Face: Apple has created a Watch Face to come along with the relaxing Breathe app. From now on you can relax and reduce your stress even better, directly from your Watch Face. There are three animations to choose from. The Classic one, Calm and Focus.
2. New Motion Watch Faces: There are also three new Motion themes included in watchOS 5, which animate the display of your smartwatch when you raise your wrist or tap the display. They’re called: Fire & Water, Vapor and Liquid Metal. However, you have to test them out to convince yourself.
3. New Photos Watch Face Option: The Photos theme isn’t new but in watchOS 5 you can opt for the Memories feature, which displays curated images from the library!
4. Activity Watch Face Redesign: This popular Apple Watch theme has been also upgraded to take advantage of the new Apple Watch Series 4 enlarged display. It can now host up to 8 complications, when used with the new hardware.
Tip: Press firmly on a Watch Face to enter the edit menu. Swipe-left or right to browse faces. Tap the one you would like to pick, or press “Configure” to tweak it before using!

watchOS 5 New Complications
There are also new glances available for your Apple Watch after updating to the 5th iOS generation. They’re available for all compatible models and not just to the AW Series 4 models that come with more screen real estate:
1. Walkie-Talkie Complication: The new push-to-talk Apple Watch feature couldn’t come alongside a Watch Face icon. When enabled it allows you to open the Walkie-Talkie app with a single tap.
2. Podcasts Complication: comes along the new Podcasts app that is now a standalone application on your Apple Watch too.

Fact: More info about Watch Faces can be found here.