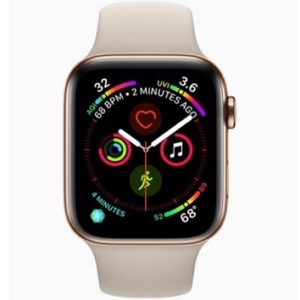 Apple has released its first redesign for the Apple Watch, 3 years and a half after it premiered! The Apple Watch Series 4 comes with a 30% bigger screen, a slimmer case and upgraded internals! All other previous iterations of the watchOS device haven’t featured a redesign, but now it’s definitely a great time to upgrade. Below you can find a list of all the important changes and new features.

Apple focuses on health with this new Apple Watch model. The Series 4 packs a new electrical heart rate sensor, that combined with the electrodes placed in the Digital Crown, allow the watchOS 5 device to take a FDA approved electrocardiogram. An ECG can detect the presence of Atrial Fibrillation which is a health condition that is an indicator for major heart problems!

Apple Watch Series 4 Facts & Figures
1. Sizes: The new Apple smartwatches come in two sizes: 40 mm and 44 mm (2mm larger when compared to the previous models). The screen real estate is 32% respectively 33% larger, thanks to the rounded corners and the display that flows into the casing! On top of all this the Apple Watch 4 body is slimmer than those of its predecessors, making the device more user-friendly and comfortable to wear!

2. Models & Materials: There are a two main finishes available Aluminum and Stainless steel. The first option starts at $399, while the second debuts at $699. Silver, Gold and Space Gray colors are available for all finishes. Also, all the above models can include or exclude Cellular support. The cheapest Apple Watch Series 4 is priced at $399, while the most expensive the Stainless Steel one with Milanese loop starts at $799. Of course that this values come for the smaller 40mm models, while the bigger versions come with the respective price increase.
Fact: All AW Series 4 units come with a black ceramic and sapphire crystal back enclosure. This enhances better cellular connectivity because radio waves can travel through the watch’s case easier!

3. Digital Crown: This revolutionary round control wheel has been take one step forward. It now provides haptic feedback for an improved user experience. It also includes electrodes that help closing the electric circuit, when performing an electrocardiogram, as described below.

4. S4 Processor: The 4th generation Apple Watch processor is faster and more efficient than ever, ensuring more processing speed while demanding less energy! The Cupertino-based tech giant claims that the S4 is twice as fast as its predecessor.

5. New Watch Faces: All though this is a watchOS 5 feature, the new backgrounds are possible because of the Apple Watch Series 4 hardware improvements. A new Infograph watch face supports 8 complications. You can also find a new Breath watch face, which allows quick access to the relaxing Breathe app. WatchOS 5 also brings a series of new motion watch faces including: Fire, Water, Liquid, Metal and Vapor which have the role to emphasize the quality of the new display!

6. Louder Speaker: The Series 4 AW comes with a 50% better speaker, which is now also used for the Walkie-Talkie mode, besides the usual Siri interactions and phone calls!

7. Better Microphone: The microphone has been also improved, with the help of a relocation which now reduces the echo!

8. Electrical Heart Rate Sensor: The Apple Watch Series 4 also hosts a new sensor that allows the user to perform a FDA approved electrocardiogram which can be easily sent to a doctor. The smartwatch is able to detect the presence of Atrial Fibrillation which is a strong indicator of a serious heart problem. To perform an ECG the wearer is required to place a finger on the Digital Crown in order to close the electric circuit.

9. New Accelerometer & Gyroscope: These two sensors have been also improved and they are now able to detect a fall of the person who’s wearing the device. The Watch analyzes the wrist trajectory as well as impact acceleration and can determine if the owner has suddenly collapsed or has bit hit by something. If no motion is detected after the incident the Apple Watch can automatically call the emergency services and also dispatch a message to the emergency contacts.

10. Battery Life: The battery lifetime has been expanded, although the actual capacity of the hardware hasn’t changed. Thanks to the more efficient S4 processor and the new LPTO display technology, that uses less power, the Apple Watch Series 4 comes with an 18-hour battery life, while using all the new features available above. The battery life for outdoor workouts has been expanded to 6 hours.