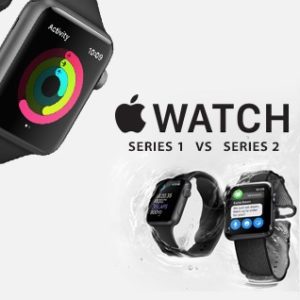 As expected, Apple’s September 7 keynote included the release of the next Apple Watch generation. Surprising was the fact that the Cupertino-based tech giant introduced two new wearable models, the Apple Watch Series 1 and Apple Watch Series 2. It’s a pattern that looks similar to the iPhone roll out scheme, which includes the iPhone 7 and the iPhone 7 Plus. The bigger version usually comes with a few extra features that should justify the higher price. This is a strategy that started 3 years ago with the revolutionary launch of the iPhone 6 and iPhone 6 Plus.

I will be highlighting in this article the differences between the two new Apple Watch models and compare them both with the original smartwatch version. This way you can easily decide for what version to opt. First of all, you should know that the initial Apple Watch version isn’t available for sale anymore. It’s place has been taken by the so called, AW Series 1 that borrowed all features from the maiden device and adds a new dual-core processor that significantly increases the processing speed of the wearable. 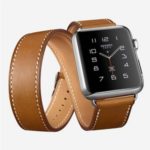 2. Power & Battery
The two Apple Watch versions are equipped with the same built-in Lithium-ion battery that offers up to 18 hours of usage time. The package includes a Magnetic charging cable for both options. The Series 2 version comes extra wit an USB Power adapter which allows you to charge it directly from a computer and not only from the power outlet.

3. Display
AW1 packs the same features of the original Apple Watch while the Series 2 comes with a second-generation OLED Retina display that is twice as bright as the initial version (1000 nits versus 450 nits). Both come with Force Touch while the screen is Ion-X glass for the Aluminum cases and Sapphire crystal for Stainless Steel and Ceramic casings.

4. Shape
Although differences are insignificant and can be noticed only if you carefully look at the two models sitting next to each other. The Series 2 Apple Watch is a bit more rounded and millimeter thicker. The shape change must be justified by the new water resistance rating and the built-in GPS.

5. Chip
The Series 1 owns a dual-core processor that is twice as fast as the initial Watch, while AWS2 packs the same chip but also comes with an extra Built-in GPS. 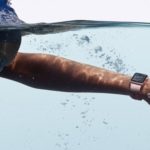 6. Water Resistance
The AWS1 is labeled as Splash resistant with a rating of on the Ingress Protection scale of X7. IPX7 means that there is no dust resistance rating awarded, while the water resistance level is towards the high end. You can read more about the IP scale.
Apple Watch Series 2 has a water resistance level of 50 meters according to the ISO standard.
As a conclusion, the Apple Watch 1 withstands water as long as it’s occasional and the device isn’t submerged in it, while the AWS2 is waterproof when submerged in shallow waters. This means that you can take it for a swim and a pool party, but not to scuba diving. 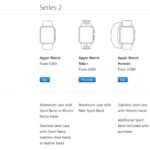 7. Pricing
To justify the extra features it’s obvious that the Series 2 Apple Watch is much more expensive when compared to the AWS1, but has about the same price the initial wearable had at the time of its launch in March 2015.
The cheapest Series 1, the 38mm version, can be bought in the U.S. for $269, while the smalles Series 2 two device starts from $369. The starting price considerably increases for the Apple Watch Hermes ($1149), while the Apple Watch Edition starts at ($1249).

Fact: Both Series run watchOS 3! The 3rd generation is also downloadable on the original Apple Watch.