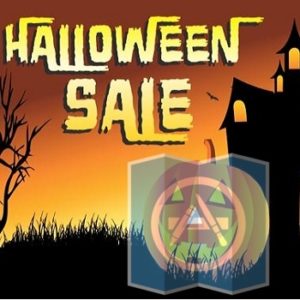 Halloween is knocking at our doors, but I’m sure that before you get out and start scarring friends and neighbors, you might wanna get in the mood, with the help a few iOS games that focus on the horror theme. Happily, App Store comes to meet your needs and has convinced developers to bring up a few discounts that are almost impossible to refuse. I’ve just completed the list with all games that are currently on sale to celebrate Halloween, and most of them are discounted for the first time and will be only until the trick or treat celebration ends.
Update: Check our 2017 Halloween App Store Sales collection!

So, grab your iPhone, iPad or iPod Touch and be prepared to get terrified before you go out and spook others. Follow the links provided below and download the games from their official App Store page. Make sure that you get back to us because we’re continuously receiving mails from developers that decided to join the Halloween sale and have included their scary apps in the 2016 Halloween promotion!

The 2016 Halloween Spooky App Store Promotion List
1. Severed ( -> $2.99) – This role playing game comes with a huge discount during the Spooky Games promotion. Save $4 and get control of Sasha, and one-armed warrior in her quest to find her family. Help her advance in a nightmare world and battle fierce monsters.
2. Crypt of the Necrodancer ( -> $1.99) – This scary app comes with a 60% discount to bring you in the Halloween grove. It’s a rhythm game that requires you to move to the music and solve the dungeon puzzle.
3. Road Not Taken ( -> $1.99) – A spooky turn-based game that requires you to survive life’s surprises. The gameplay includes a lot of secrets that makes this software interesting enough to make you wanna play it over and over again. You’re a ranger that has to rescue children lost in the forest during a brutal winter storm.
4. The Room Three ( -> $1.99) – A physical puzzle game that asks you to accomplish a series of trials, while being stranded on a remote island. This is the third sequel of the highly successful “The Room” and “The Room Two” award winning App Store games!
5. Operation Dracula ( -> $0.99) – is the shooter game that’s best suitable to be played during Halloween weekend. It allows you to spread virtual blood all over the place and listen to an intriguing Japanese style soundtrack. Be cautious the Extreme Challenge mode is not for the feint at heart!
6. Rok ( -> $2.99) – The action takes place in a cavernous Norse prison of the future. You have to help and old man to escape. He has been trapped there for years. Use his telekinetic abilities to get pas advanced security systems, sneak past beasts and fight the sentinels in your quest for freedom.
7. Shadowmatic ( -> $0.99) – Is a puzzle-game that revives your imagination. You have to recognize silhouettes that match the surroundings, while spinning abstract objects in a spotlight. It’s a light Halloween game suitable for children too. It comes with a 66% discount during the Spooky App Store Promotion.
8. Home – A Unique Horror Adventure ( -> $0.99) – This is an unique horror adventure game that will freak you out. You wake up in a dark room of a house that’s not yours. A storm is about to unfold and you have to solve a murder mystery and you’re the one that’s having the final word. Take care!
9. Skullduggery ( -> $0.99) – This App Store game is discounted starting with today and up to October 31st. You’re playing the semi-organic autonomous skull that’s collecting taxes (a kind of death IRS agent) from the dead of the Afterlife! Good luck!
Updating:
10. Camping With Grandpa ( -> FREE) – This game isn’t spooky, but it’s educational instead and has gone FREE during the Halloween weekend. Children learn interesting things about wildlife, orientation and other camping specific information. The app has just received an update to blend in the Halloween theme, with the help of fall-theme backgrounds, as well as all-themed items in mini-games: pumpkins, turkeys, leaves, and more. Educational games include: Hiking Gear, Read a Compass, Take a Hike and many more.
11. Imbroglio ( -> $2.99) – A deck-building tactics game that requires you to choose a hero and survive in the dungeon’s shifting labyrinths that are filled with scary creatures, but also valuable gemstones.
12. Grim Fandango Remastered ( -> $1.99) – “Meet Manny Calavera, travel agent at the Department of Death” that’s how the App Store description of this game starts. If you’re looking for more, find out that he sells luxury packages for a 4-year journey for souls that are looking to find their eternal rest. However, although a travel agent’s job should be considered trouble-free, it’s not the case in Grim Fandango. This adventure game shouldn’t be missed during your Halloween gaming session.
13. Ski Safari 2 ( -> FREE) Download this top paid iOS app for FREE, today only. Celebrate Halloween by performing endless downhill skiing runs. Spooky themed costumes and skiing gear available with version 1.4. This app also comes with massive discounts for its in-app purchases. Don’t miss this one!

New Arrivals: 1.The Forgotten Room ($1.99) is a new App Store game that fits in our horror theme. Because this is a new arrival, it doesn’t come with a discount, but I thought that you might wanna impersonate the paranormal investigator John “Buster of Ghosts” Murr and help him find out what happened with a 10-year-old girl that disappeared while playing with her father. Explore the creepy house and solve the mystery!
2. Lifeline: Flatline ($2.99) – An interactive horror story that requires you to lead a woman named Wynn through the perils of a sophisticated scientific facility. Your character wakes up strapped to a bed and you need to guide her to dark hallways and creepy rooms, to help her get to the outside world. This game is also Apple Watch compatible. Receive notifications and interact with the app directly from your wrist.

Bonus: After you finish playing you’ll surly go out to grab some candies. When you do make sure that you capture some terrific photos because here are two apps that gone FREE for a limited time only. Use them to add stunning effects to your photos, with a single tap:
1. Filterloop Infinite ($2.99 -> FREE) – adds retro and analog film effects, tap for an unendless number of combinations.
2. Ultrapop Infinite ($2.99 -> FREE) – Select a photo from your CameraRoll and add color effects with a single tap. Tap again to loop through an infinite number of color combinations.