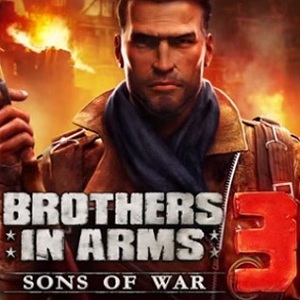 Brothers in Arms 3: Sons of War

One of the most popular new games on the App Store, at the beginning of 2015, is a classic World War II shooter developed by Gearbox Software and published by the French from Gameloft. It’s called Brothers in Arms 3 and marks the 11th release of the famous BiA franchise. Sons of War is the iOS sequel to BiA Hour of Heros (released in 2008) and BiA 2: Global Front (2010).

This third person shooter follows the clash between the Allies and Axis forces. Action starts on June 12th 1944 in Basse-Normandie, France. While the Germans focus on the Allied invasion, you as Sergeant Wright and your brothers have to fulfill a series of very important intelligence and under cover missions that will help to the liberation of Europe! 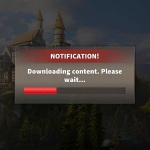 Download and Play BiA 3: Sons of War
If you wanna give a helping hand to the Allies and win World War II download and install BiA 3 now! This game is 482 MB big so make sure that you’re on WiFi and that your iOS device have enough space to store and run it.
The first time you open BiA 3, after installing it, you’ll have to wait about 30 seconds and allow the app to download additional content. Once completed, you’re ready to start your first mission! 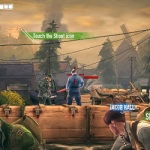 Because this game is a shooter it’s obvious what the main action is. However, you would be surprised to find out how complex the gameplay is. The deeper your progress the more weapons, brothers and other elements have to be controlled. However, the main functions that you need to master from the start are: shooting and moving. Manipulate your hero in two different ways. First, while under cover, slide your fingers along the screen to lock on a target. Secondly, move your character around the combat scene using the four-arrowed pad available in the left hand side. To fire hit the Shoot icon, found bottom left. 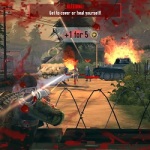 Whenever you start a new mission you’ll be notified about your goals for the upcoming combat. Each completed assignment earns you a star. A campaign is completed when your fulfill all its missions and collect the needed amount of stars. Mission goals can vary from achieving a predetermined number of headshots, staying above a certain Health Percentage goal, scoring good shoot accuracy percentages, eliminating enemies and so on. The further you progress the higher the chances of unlocking secret missions which bring handsome rewards. 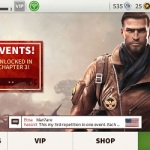 The main tweaks that you have to look for while accessing the BiA 3 menu, are the Settings. Tap the two gear wheels available in the top left corner and tweak Language, Audio and Control settings. Connect with social media or seek for help. Tap Back (top left corner) to return to main menu. Next, you can check your achievements, opt for VIP packages and even engage in the games’ chat room. Talk with other players and ask for feedback if needed. Once, you unlock the Events feature you can compete with worldwide players in special campaigns. 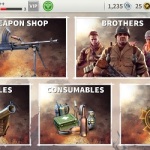 The resources you earn during your missions have to be used to shop and upgrade your gear. You can access the games’ Shop from the main menu and purchase anything from consumables, to weapons, packages, bundles, weapons and even upgrade brothers! Each of your 12 brothers will be unlocked and become available as you complete missions. Weapons become more efficient if upgraded.
If resources aren’t enough you can use real money to buy game credits, via App Store’s in-app purchase feature. 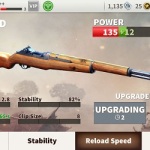 For example, a rifle has four main performance characteristics: Fire Rate, Stability, Reload Speed and Clip Size. The more you upgrade it the faster it will fire, with a better precision, for a longer amount of time and with fever reloads. This makes your hero more efficient, from every point of view. Depending on the complexity of the upgrades the more they cost and the longer it takes to have them installed. However, I’m sure that you can find the right balance! Forgot to mention that you also have an energy counter. The maximum level is 11. Every time you start a combat your level is dropped by one unit. 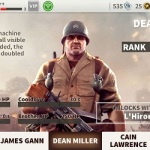 Last but not least here is the complete Brother in Arms 3 team. If you play the game up to its final stages you’ll be able to unlock all 12 members! Use their skills whenever the enemy seems to have the upper-hand: Jacob Hall (Calls an Air Strike that detonates five bombs); James Gann (Expert Sniper that spreads panic within enemies); Dean Miller (Deploys a machine gun that kills everything in sight); Cain Lawrence (Throws Molotov Cocktails that engulfs target in flames); Larry Jackson (The veteran with rockets); Barnaby Adams(Another Air Strike specialist); Andrew Mohawk (The land mine expert), Neil Yates (Operates mortar guns); Mathieu Chaput (Kills enemies silently with the help of a crossbow); Francis Barker (Triggers long-range bombardments with cannon projectiles); Jonathan Millard (The medic in your team); David Carter (A sniper that makes targets drop collectibles).