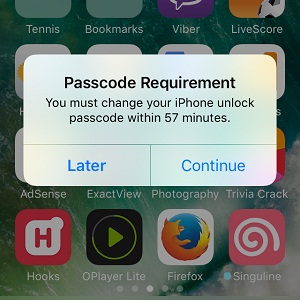 A series of iPhone users, including myself, have lately been faced with a strange looking prompt asking for an unlock Passcode change within the upcoming 60 minutes. The message appears on the home screen of the iOS device and is entitled Passcode Requirement. It clearly states “You must change your iPhone unlock Passcode within 60 minutes” and comes with the option to postpone or perform the demand. If the Later option is tapped the prompt re-appears whenever the iPhone is unlocked and displays the same message, while counting down the amount of minutes left for you to perform the task.

Because this never happened before and seems to come out of the blue, everyone’s first reaction is to panic and suspect a phishing attempt. iOS is known for its stability and security, but in some rare cases it can happen for an iPhone to get corrupted. So, must of us will surly tap on Later and start researching about this happening, hoping that the prompt will disappear forever. The bad news is that the request will get back to you within minutes. However, the good one is that you’re not facing malware. Your iPhone is most probably clean. Read on to find out how to solve this Passcode requirement and what’s the cause for it! 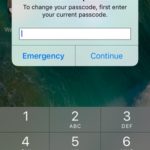 Why Am I asked to Change My iPhone Passcode?
There are several reasons for your iPhone to ask you to change your unlock Passcode within the next 60 minutes. Most of them are logical ones, other are caused by some settings that you have on your iOS device.
1. 4-digit Passcode: Apple encourages users to increase the security of their devices by using 6-digit Passcodes.
2. Common Passcode: If your iPhone unlock code is too simple, iOS can detect that and ask you to use something less common. 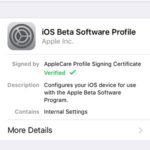 3. Configuration Profile: If you have a configuration profile installed on your device. For example the iOS 10 beta one, it can trigger this Passcode Requirement prompt. To prevent it from re-occurring you can go ahead and delete the profile. Open Settings -> General -> Profile and check if a profile is available. Tap on in and the Delete Profile option is available at the bottom of the page. Enter your Passcode to confirm the erasure.
4. MDM Enrollment: If you own a business iPhone which is enrolled to the Mobile Device Management system you might be asked to change your Passcode from time to time in order to prevent data leaks.
5. iOS 10 Feature: In my case, I do use a 6-digit password, which isn’t common. My iPhone isn’t MDM enrolled but has the iOS 10 beta configuration profile installed. So it’s either that, or the unlock Passcode requirement change is a new iOS 10 feature that will ask users to change their security key, from time to time. 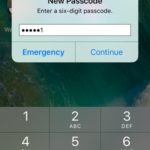 How To Solve Passcode Requirement Prompt
Now, that you know the causes that could have triggered the request on your iPhone, here is what to do in order to solve it. If you’re in a hurry you can press Later but this will only postpone the inevitable. After the first appearance the 60-minute countdown starts and you need to act. Tap on Continue and type your current unlock code.Next, you’re asked, by default, to enter a 6-digit Passcode. Comply an hit Continue. Re-enter your new Passcode to confirm it and that’s it. 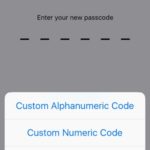 If you don’t want to stick with a 6-digit unlock code, browse to Settings -> Touch ID & Passcode, enter your current password an scroll for Change Passcode . Now, enter your old code one more time and tap on Passcode Options, available at the bottom of the screen. Choose 4-Digit Numeric Code and type the desired Passcode. You can also opt for a Custom Alphanumeric Code (letters and numbers) or a Custom Numeric Code (a higher amount of digits).

Fact: The current Passcode Requirement feature seems to have a glitch. If you’re already using a 6-digit numeric combination you can type the same string when asked to change your unlock Passcode. iOS accepts it and the request is solved.