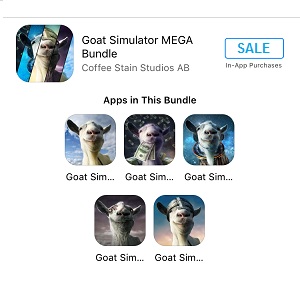 The Goat Simulator games for your iPhone and iPad are now on sale in the App Store. Coffee Stain Studios has cut the pricing of 5 iterations including the original Goat Simulator, as wells as the Goatz, MMO Simulator, Waste of Space and Payday. All the above mentioned apps usually retail for $4.99 and are now downloadable for 20% of the original pricing, at $0.99. Also worth mentioning is that the Goat Simulator Payday edition is on sale for the first time, so don’t let this one slip away.

If you don’t know the franchise, Goat Simulator is a “stupid” (term used by the app’s developers in the game’s official App Store description) time-killing game that allows you to play the role of the goat and gives you the freedom to wreck things. Sky is the limit so be ready to embark on a destruction journey. Depending on which edition you play, you can impersonate various types of goats. For example the newest iteration, Goat Simulator Payday introduces four new goats: “A flying flamingo, a wheelchairing dolphin, a spitting camel and a goat that’s just really handsome”.

Tip: If you’re a fan of the franchise you can download all the above listed games even cheaper. Grab the Goat Simulator Bundle MEGA for $3.99 and save an additional buck!

Fact: These apps are compatible with iPhone 4S, iPad 2, iPod Touch 5 or newer devices that run iOS 8.0 or later.

Info: For more App Store Deals for your iPhone and iPad tap here!