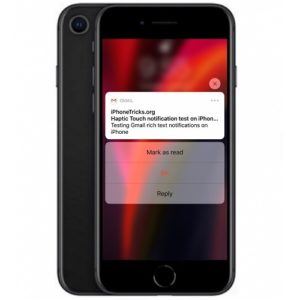 This is how rich text notifications should look on the new iPhone SE!

The 2nd generation iPhone SE has been released by Apple almost two weeks ago. The device got an overwhelming positive feedback mainly focused on the great price/quality ratio. However, as time goes by and users manage to test the device more thoroughly shortcomings also start to pop up. One of them is the missing Haptic Touch functionality on the Notifications and Lock Screen. Apple has equipped the 2020 low-priced iPhone with Haptic Touch feature instead of the premium 3D Touch. To clarify things, the first allows shortcuts for long-pressing specific parts of the screen while the second provides pressure-sensitive commands.

Replacing Haptic Touch with 3D Touch isn’t new for Apple. The Cupertino-based tech giant has started the trend, two years ago with the iPhone XR and continued it with the iPhone 11 lineup. Apparently, removing the 3D Touch hardware allows designer to create even thinner bezels for the touchscreen. The only difference between the new iPhone SE and the previous iPhone models that got Haptic Touch instead of 3D Touch is that the new one is missing quick-action commands on the Notifications and Lock Screen.

How To Fix Missing Haptic Touch On iPhone SE Lock Screen
Our testing shows that this doesn’t seem to be an iOS bug. We’ve tried to reset our testing unit to factory settings and even set it up again as a new device. No help. Nothing happens when we attempt to long-press a notification on the Lock screen.
Fix: We did find a workaround though. You can slide-left on a notification to unveil the the View option and access it from the Lock screen!
Fact: Interactive options are available when trying to press on an incoming notification while the iPhone is unlocked (in use).
More, a Reddit user managed to contact Apple Support and he got the confirmation that this is not an iPhone SE bug. 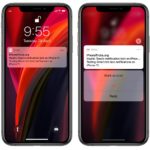 How Haptic Touch Should Work On iPhone SE Lock Screen
Users expect the same quick-action features for Notifications, available on the other iPhones that come with Haptic Touch support. For example the rich notifications menu found on the iPhone 11 includes

Conclusion: There is no doubt that the iPhone SE is able, from the hardware point of view, to support Haptic Touch on the Lock screen! This limitation originates software-side. Our opinion is that the new iPhone SE runs an iPhone 8 modified iOS version. The iPhone 8 does pack 3D Touch hardware and the developers that have tailor-made it to fit the new low-priced iPhone might have neglected the difference. Thus the iPhone SE software expects for 3D Touch to handle this part of the Lock screen notifications interactions. Our guess is that Apple will soon provide a software update for the iPhone SE that will fix this shortcoming!

Related: Have you see the new iOS wallpapers that come with the iPhone SE? Check them out and download them for any iPhone model!