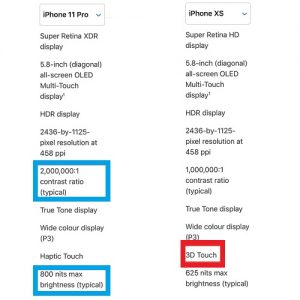 Apple’s Special Event keynote has just ended and everyone is talking about the new features found in the newly released iPhone 11, 11 Pro and 11 Pro Max. However, there’s also a highly popular feature that has been left out. Yes, rumors and leaks have been confirmed! Apple has discontinued the 3D Touch functionality in the 2019 iPhone flagships. Although this hasn’t been mentioned in the keynote, because of obvious marketing reasons, Apple’s official website confirms the news.

Why Has 3D Touch Been Discontinued?

Why would Apple discontinue one of the most popular features on their iPhones. Because of technical hardware reasons some would claim. However, 3D Touch has been introduced years ago. The first iPhones with 3D Touch support have been the iPhone 6S terminals. Some claim, that this change might be related to recent patent infringement lawsuits that Apple settled recently. Nevertheless, the change has started last year when Haptic Touch was introduced on the low-end iPhone XR. Back then we though this was done to cut costs and make the entry-level model more accessible to the masses in terms of pricing. What’s your opinion on this subject?

What’s your favorite 3D Touch trick that you will miss the most after updating to iPhone 11?