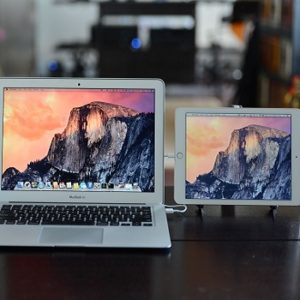 This is a trick for the iOS power users! Did you know that you can stream the display of your Mac or Windows computer on your iPhone or iPad? This feature practically allows you to extend the screen size of your desktop or notebook. If one smart device isn’t enough you can mirror the computer’s screen on two or more iPhones. This is really helpful for those of us working daily on Mac or Windows terminals and want to increase their efficiency with the help of multitasking.

To accomplish this feat you need the help of a third party called iDisplay. The software, developed by Shape GmbH, is available for download from the App Store and is now heavily discounted. You can grab it for $9.99 instead of . Do mind, that this is a limited time offer only and can expire in any moment. 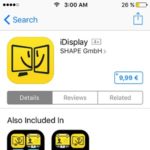 First of all, you have to make sure that the iOS device that you plan to use is iDisplay compatible. The app works with smartdevices running iOS 7 or newer.
Step 1: Download iDisplay on your iPhone, iPAd or iPod Touch.
Step 2: Install the iDisplay desktop app to your computer too (Mac or Windows). The software is free of charge and can be grabbed from getidisplay.com.
Step 3: Connect your iOS device to the computer in question with the help of the lightning cable. (Feature also works via Wi-Fi if both devices are connected at the same network).
Step 4: Open the iDisplay app on your iPhone.
Step 5: The computer recognizes the secondary screen and provides further tips about how to easily get things going.

Fact: According to the developers, studies have shown that productivity is increased by 44% for users that use two computer monitors instead of one.

iDisplay Tips and Tricks
– You’re allowed to connect up to 10 devices (depending on hardware specifications) to a single computer.
– Feature works via WiFi, but I suggest the lightning cable if you want to be lag free and avoid unnecessary problems.
– The secondary computer display represented by your iPhone, iPad or iPot Touch isn’t just a regular display. It’s interactive too. You can use the touch screen to move objects, draw, control playback pan and zoom your desktop.
– You can switch between portrait and landscape mode by turning your iOS device. The screen adjusts automatically.
– Use iDisplay as a secondary computer screen or mirror the entire Mac or Windows content on your smart device. Depending on the situation you can choose to increase the screen size and use the iPhone or iPad to watch tutorial videos while codding at your notebook. The second option is useful when you have a presentation and want to share the content of your desktop with other iPhone owners, by connecting them to your computer via iDisplay.