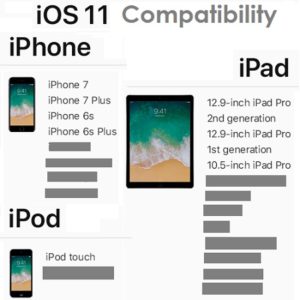 Apple has recently introduced its 11th iOS generation to the public, during the WWDC 2017 keynote. Although the new OS will be officially released in late September, it’s extremely useful to know if your smart device will be able to run it or not. Of course, that iOS 11 will be compatible with the iPhone 7, 7 Plus or 6S and its oversized version, but there are a lot of iPhone and iPad users that don’t upgrade to the latest version every year or every 24 months. Below, you can find a list with all Apple gadgets that run iOS and will be able to support the upgrade to iOS 11.

If you’re smartphone or table doesn’t make the cut, you should consider purchasing a newer model, to benefit from the newly added features and the security and comfort of using and up to date operating system. iOS 11 will be defined as the software that powers the anniversary iPhone edition, anticipated as the iPhone 8, as well as the traditional S-cycle models. At the time of writing, the software is already available for beta testing, to Apple Developers and is soon expected to go live for Public Beta testers too.

iOS 11 Compatible Apple Devices
Check out the models listed nearby and find out if your current iPhone, iPad or iPod touch qualifies to run iOS 11 or if you should plan a hardware upgrade in the upcoming months.

Update : Obviously, the iPhone compatibility list will also includes the new iPhone models released in September the iPhone 8, iPhone 8 Plus and iPhone X.