Apple has just released another update for iOS 8, which fixes a quite severe problem reported by numerous iPhone 6 and iPhone 6 Plus users: poor cellular network signal, accompanied by dropped calls! This and 8 other fixes are available now with the iOS 8.0.2 update.

We’ve just updated to this latest version and it seems OK, compared to the problematic iOS 8.0.1 upgrade released a few days ago. The previous iOS correction caused quite a hectic as iPhone users started to experience dropped calls and problems with the Touch ID function, which made the Cupertino manufacturer to pull out the release.

So, if you where unlucky to upgrade to the problematic 8.0.1 before Apple pulled it out, don’t hesitate to upgrade to today’s 8.0.2 release. Also, this update is safe for all other iOS users.

It comes with 9 improvements and bug fixes, the most important of them being the above mentioned cellular network connectivity problem and the improvement of the Reachability feature for the iPhone 6 and 6 Plus versions.

iOS 8.0.2. Update Facts
– To perform the update please tap on Settings -> General -> Software Update -> Download and Install
– iOS 8.0.2 update takes 12-15 minutes to download and install itself
– iPhone restarts after the latest iOS version has been installed
– all improvements and bug fixes are available in the nearby image and shared here: 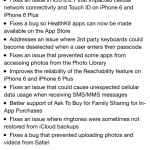 iOS 8.0.2 Update Tutorial
Watch how the iOS 8.0.2. update unfolds and review all improvements and bug fixes: