Apple has just released its latest public iOS update, aimed to solve important glitches occurring while using the revamped Music app. More than one month after the release of version 8.4, which was responsible of introducing the revolutionary Apple Music service to the world, iOS 8.4.1 promises to solve significant bugs. One of them preventing users from turning on the iCloud Music Library, for example.

Without being able to activated the library, saving tracks for offline listening is impossible. The flaw causes a major discomfort to all Apple fans, because it prevents them from using Apple Music at its true potential. However, most nightmares should be over now. Open the Settings app on your iPhone, browse to General -> Software Update and let your iOS gadget inquire about the latest update! 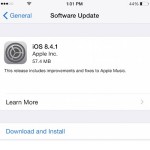 As soon as the update is found tap on Download and Install and let your device work its magic. The update package will be downloaded first and then automatically installed. Make sure that your iPhone’s battery percentage is above 50%. Else, plug the gadget into a power source before starting.
The whole process takes up to 30 minutes, depending how fast your Wi-Fi connection is.
You can also perform the update via iTunes on your computer. Plug your iPhone into your Mac or Windows desktop or laptop, open iTunes and the software will automatically prompt you with a pop-up informing you about the new release. Click on Download and Update and have patience!
Fact: The release is very fresh. You might find Apple’s servers busy as most users rush to download and update to iOS 8.4.1. If the download is too slow and you can’t wait, pause or cancel it and retry a few hours later as the rush hour ends. 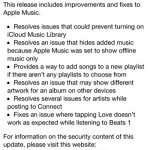 – Fixes a bug that could prevent iCloud Music Library from turning ON.
– Solves a problem that hides added music for some users, because Apple Music is set to display only the offline songs.
– You can now add a track to a playlist even if there aren’t any collections to choose from, by allowing users to create a new playlist.
– Solves a glitch that could display different artworks for the same album on various iOS devices.
– Fixes and issue with the Love button and its strange behavior while listening to Beats 1 Radio Station.
– Handles problems occurring to artists while trying to bond with their fans by posting via the Apple Music’s Connect feature.