FIFA 15 Ultimate Team is an EA Sports franchise of the most popular soccer (football) simulator, available on the App Store. It’s in fact the top soccer video game worldwide, no matter on which platform it’s run or what controls are used for playing it.

You can dribble, slide, pass and shoot with your favorite football stars on your iPhone, iPad or iPod Touch. FIFA 15 UT is played on mobile devices, with as much enthusiasm as the more conventional computer or video game console options. More, this game is available for download, free of charge, within the App Store.

This EA Sports product is now featured among the 25 apps that partnered with Apple for the RED campaign. An AIDS fund raising project aiming to help the Global Fund reach its goal of having an HIV-free generation.

How To Play FIFA 15 Ultimate Team 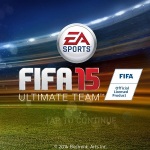 First of all you have to install and download FIFA 15 UT from the App Store. Be aware that this is a high quality app which requires 1.35GB of storage space on your iOS device. You also have to take in account that this game requires a stable Internet connection. Make sure that you are hooked up to a WiFi hotspot or have good data signal. If your carrier data plan is limited, pay attention not to incur extra charges, especially when downloading the game! Now, if you’re ready, launch the application and get ready to score! 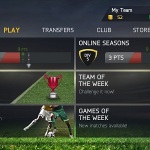 EA Sports currently offers 6 playing modes for all soccer fans. Each match you engage in, earns coins depending on your achievements. These coins can be spent in the Store and Transfer Market sections of the game. FIFA 15 is practically a combination between a soccer simulator and a football manager. You start off with a noname team and manage it until it becomes a famous as FC Barcelona or Real Madrid.
The six reasons to play football matches are: Regular Seasons (traditional league season, where you seek promotion for the upper leagues), Online Seasons (regular league season, played against other online players – matches could last a bit longer because of synchronization breaks. Also each opponent can claim three 30-second breaks), Tournaments (you play elimination style competitions), Team of the Week (your team plays a single match against an all star team formed by best performing players from the real world football scene), Quick Match (allows to match-up your squad with any popular team from the world and play a single match) and Games of the Week (you can pick a favorite club and play the derby of the week scheduled in the real world). 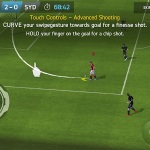 To be a good manager you need to know how to spend your coins properly to best improve the value of your squad. Nurture your assets and decide when it’s best to invest in a training camp, or to better spend money on transfers. I won’t go into many details on the financial side of the game because every fan should plan his own budget the best it suits him. However, I will provide a few tips about how to play and win most of your soccer matches. EA Sports has introduced a combination of classic player controls and touch-screen gestures that allow an enhanced playing experience.
Here are a few tricks that help you get the best out of your players: 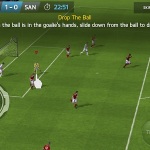 – Goalkeeper: When performing a goalkick swipe from the ball to the direction you wish your goalie to pass the ball. The faster you swipe, the more power will be used to kick the ball. Before clearing, you can also use the left and right arrows, colored white and available in the bottom corners of your screen, to move your view to which side of the pitch you plan to clear the ball. During play, when the ball reaches the goalie’s hands, you have 6 seconds to clear it. You have three options: kick (use the virtual D-pad arrows to move the keeper towards the edge of the box and press Shoot), throw (tap on a player of your team in the proximity of the goalie, to throw the ball to him) or drop ball (slide down from the ball for your keeper to drop it) and pass it to one of your defenders. 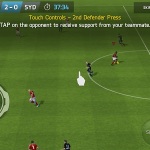 – Defending: Sprint & Tackle will be your favorite defending action, because your player attempts a conservative approach on the opponent player to slow him down and eventually win the ball. Slide is recommended only in desperate situations. This action often creates a foul because it needs perfect timing in order to perform a clean recovery. Switching between defenders can be done by touching the Switch control, or by tapping a teammate to automatically switch. A nice defending trick, when the opponent becomes dangerous, is to tap the attacking player and your nearby defenders are automatically called to agglomerate the zone.
– Attacking: in the offensive you have to master three important skills: passing, dribbling and shooting. 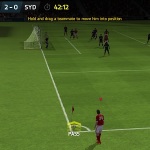 Passing can be performed in multiple ways. The longer you hold the pass button pressed the more powerful the action will be. If you hold it too long the pass will turn into a cross or lob through pass. You can also send the ball to one of your strikers by tapping on him.
When performing a set piece or corner kick you can tap on the teammate that you wish to pass too. Before doing this, you also have the option to bring him in position by holding and dragging him towards the desired location. The same actions apply when performing a throw-in or a goal kick. 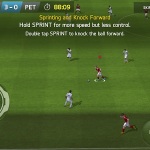 Dribbles can be performed in two ways. You can either try to outrun the defender or use your player’s skill to get pas him. For the first option you need to press and hold the Sprint button after navigating your player on the optimal running path. Make sure that your running path doesn’t intersect with the opposing player. To increase changes and if space is available, double tap Sprint button to knock the ball forward and gain additional speed. For a successful move you need a rapid striker versus a slower defender. Else you can perform a skilled dribble. This action is activated by double tapping and holding the virtual D-pad. Your player will hold the ball tight and beat the defender. 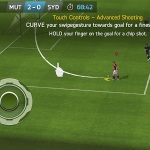 Shooting is the final piece of the puzzle. The longer you hold the Shoot button the more powerful your shot will be. However, increased power brings decreased accuracy, so you need to find the right balance. A great tip is to use a touch-geture. You can Swipe towards the goal to shoot. The faster the action the stronger the shot. Curve the swipegesture towards the goal and you’ll obtain a finesse shot. When you’re one-on-one with the goalie you can perform a chip shot and trick the opponent. Tap the goal and your striker will lob the ball into the net. 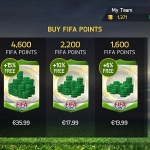 As any major franchise that is free of charge, FIFA 15 Ultimate Team also offers in-app purchases. However, the great thing is that you don’t need them in order to have a complete experience. You can buy FIFA coins, which allow you to accelerate the growth of your team. You normally earn coins by playing matches and are rewarded for achievements. But if you’re eager to compete in the upper divisions you can significantly shorten the time frame until your club reaches world class skills. If you plan to opt for a FIFA 15 in-app purchase we recommend you to do it now, because Apple donates all money to the RED campaign.