iPhone 6S and 6S Plus Free Of Regulatory Markings? 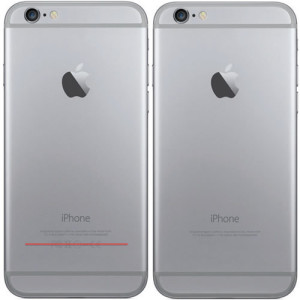 The iOS 9 Public Beta 3 incorporates one more change that seems to sleep as not significant. I’m talking about a fresh tab available in the Settings app, labeled as Regulatory and containing all legal info, about the iPhone’s passed safety checks and its clearances, for using the various frequency spectrum alloted to cellular and wireless communications. Apple’s mobile devices have to be approved by all countries where they’re commercialized in.

At first sight this could not seem too important, but the fact of having the Regulatory markings displayed in a distinct Settings menu branch, in conjunction with fresh legislation changes, allows Apple to ditch the physical engravings on the back of the iPhone, iPad and any other mobile device. This means that, starting with this fall, we could buy the new iPhone 6S and 6S Plus flagships with a “clean” back case, free of all the Regulatory info! 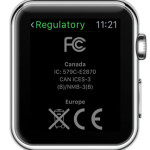 The first gadget taking advantage of this change is Apple’s wearable device. The Watch doesn’t have any Regulatory engravings on its back. The only markings found are those referring to the model type and specific materials used.
However, its software does come with a Regulatory tab in the Settings app. You have to press the Digital Crown, tap on Settings, browse to General and scroll for Regulatory. Here you’ll find a list of logo’s and symbols with all the safety accreditations provided by the regulators from the mobile communications field. 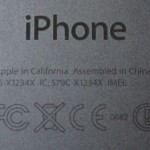 Nearby you have a graphic rendering of how the the next iPhone model, could look like, if the Regulatory markings are moved from its back case to a more virtual display, within the Settings app. The Regulatory tab introduced in iOS 9 can be found under the General menu.
First in the list is the Federal Communications Commission (FCC) logo certifying that the device has been approved and can be commercialized withing the United States. This includes maximum SAR value figures that fit within certain limits and so on. Next up, there is info about the iPhone’s regulations in Canada, Europe and other countries and regions. 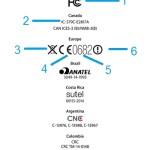 1 – The U.S. Federal Communications Commission logo. FCC ID also certifies that the device has been authorized by the commission and is build up by a three-letter company specific approval code (Apple’s one is “BCG”) followed by a model specific number.
2 – “IC” stands for Industry Canada and confirms that the iPhone complies with the radio standards required by the North American country.
3 – The X-ed garbage can symbolizes the fact the the iPhone meets the Waste Electrical and Electronic Equipment standard. WEEE is an European Union directive that requires electronic devices to be disposable in an environmental friendly way.
4 – The “CE” Mark means that the product complies with the laws of the European Union and can be commercialized in this region.
5 – “0682” is the code number of the organization that tested the iPhone to meet CE standards. In this case: Cetecom.
6 – Alert Symbol that signals that the device can operate in frequencies not supported by all European Countries.