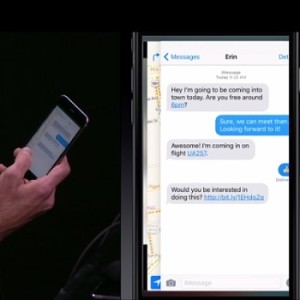 There are quite a few features and gesture shortcuts introduced with the release of iOS 9, that can be applied solely on the iPhone 6S and 6S Plus flagships. That’s because only the 2015 iPhone generation supports 3D Touch commands. One of the useful tricks that I am showing you today is a shortcut that opens up the App Switcher screen with the help of Force Touch, eliminating the necessity of the Home button double-tap when it comes to multitasking.

So, besides having a revamped App Switcher on iOS 9, if you own the iPhone 6S you also have a new way of opening the multitasking view. More, you can also swipe back with a single gesture to the previous app, not to mention that you also have the Back To previous app button available in the top-left corner of the screen.

This feature is available though only when you open a new app from the current one. That’s for example if you tap on a Youtube link in Safari and the Youtube app opens up to play the video! iOS 9 automatically creates the Back to Safari button within Youtube.

To open the multitasking screen on an iPhone 6S or 6S Plus, press firmly on the left edge of your device and the App Switcher opens up. Slide your finger towards right to unveil the applications running in the background. Tap on the one you wish to return too. After you finish with the newly switched app you can return to the previous one by applying a little force and swiping across, in a single gesture. Check the animation available nearby to see how this 3D Touch shortcut works!