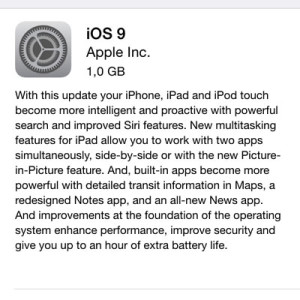 Apple has released it’s 9th iOS generation to the wide public, only a couple of minutes ago! This means that after about 3 months of beta testing, iOS 9 is now available to everyone via the Software Update menu, of your iPhone’s or iPad’s Settings app. Do mind, that the upgrade package is about 1 GB big (for iPhone 5S and iPhone 6 running iOS 8.4.1), so you should look for a Wi-Fi hotspot before beginning to download!

iOS 9 works at its maximum potential together with the iPhone 6S and 6S Plus 3D Touch screens, but this doesn’t mean that you should refrain from updating, if you don’t plan to switch to the latest Apple flagships. The 9th iOS version comes with a series of new features that make your Apple gadgets more intelligent and proactive. Fines improvements contribute to enhanced performance, security and highly notable to up to 1 hour of extra battery life! 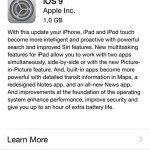 Because the release is very fresh your iPhone or iPad won’t prompt you yet with a Software Update alert which means that you have to open the Settings app and browse to General -> Software Update. Allow your device to look up for new software and the iOS 9 update screen will be displayed. Next, you can Learn More about this release or start the upgrade process by tapping on Download and Install. Agree with Apple’s terms and the iOS 9 package will start downloading. After this phase is completed the new O.S. generation will be automatically installed on your iPhone or iPad. 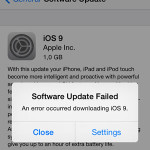 If you’re trying to initiate the upgrade and are getting an error message, don’t worry! The message can read something like: “An error occurred downloading iOS 9.” This means that Apple’s servers are too busy to handle access to your iPhone for downloading the iOS 9 update package. This is an issue that occurs often during the first hours after such and important iOS release.
Your options are to retry a few times until you manage to find a stream slot, or wait a little for the rush hour to fade!

iOS 9 Full Update Log
1. Intelligence
– includes proactive assistance by displaying relevant info even before you start typing.
– Adjusts reminder alerts based on traffic conditions.
– Learns your music listening patterns and prompts you with suggestions
– Suggested events and contact details are added to the native apps, based on info extracted from Mail.

2. Siri Improvements
– Search media based on dates, locations and album names.
– Ask the iOS virtual assistant to remind you about things you’re looking at in apps including Safari, Mail, Notes and Messages.
– Request directions via public transit.

4. New iPad Features:
– Split View: use two apps in the same time. Resize your view as you wish.
– Slide Over: use a second application without dispatching the current one.
– Picture in picture: video playback can run in the background and be resized to suit your needs, allowing you to multitask.
– QuickType: multi-touch gestures for easier text selection; support for hardware keyboard shortcuts and Unicode emoji flags.

6. Foundation Enhancements:
– Battery Life: increases because of the overall increase in performance and efficiency, Facedown detection which turns display off when iPhone isn’t used; Low Power mode optimizes battery drainers to extend power up with up to 3 hours.
– Software updates will require less space to download and can be set to install later.
– Native iOS apps and user interface use Metal to deliver faster scrolling, lean animations and increased overall performance.
– Improved security with two-factor authentication support and a default 6 digit passcode for Touch ID devices.

7. Other Improvements:
– The most visible one, a new system font called San Francisco!
– Leave a message option if a FaceTime call recipient isn’t online to engage in one.
– Share voicemails using Share Sheet
– Flight and package tracking for data detectors
– Health app receives support for reproductive health, UV exposure, water intake and sedentary state data types.
– Support for Wi-Fi calling for iPad, iPod touch and Mac
– Wi-Fi Assist to automatically switch for cellular data connection when hotspot becomes out of range.
– A new app available for Android users willing to switch to iOS called Move to iOS, which allows them to easily transfer data to iPhones.