iOS 9 Back To Previous App Shortcut 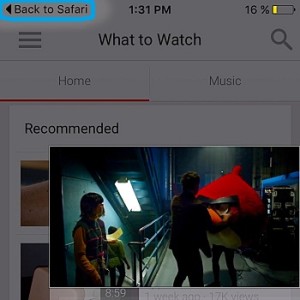 iOS 9 Back To Previous App feature.

With iOS 9 iPhone and iPad users have a new option of rapidly returning the the previously accessed application! Smartphones running iOS 8 or earlier require their enjoyers to use multitasking, to turn back to the earlier used software. Pressing the Home button twice, opens the App Switcher view and you can pick the foregoing application to turn back to it and resume where you left off. In the worst case scenario, very old iOS versions, that don’t incorporate multitasking, require users to return to home screen and tap the application’s icon once again, to return to a software that was previously accessed.

However, things get much more simple in iOS 9. If, for example, you’re playing a game and a banner notification, unfolds from the top of your iPhone’s screen, you might need to tap it and read the whole story, when the alert is too long or not interactive, to give you reply options from the current screen. This means that you’re automatically forwarded to the application that generated the notification. After you finish handling the alert, you can return to your ongoing game, via multitasking, as mentioned above or by using the new Back To Previous App feature.

How To Use Back To Previous App 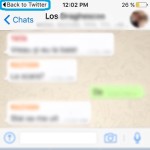 iOS 9 automatically generates a shortcut to the antecedent screen. This shortcut appears as a text button, replacing the carrier signal, in the top-left corner of the iPhone’s display. You only have to tap it once and the Apple device returns to the foregoing application.
Check out the screenshot provided nearby and see a demo of this new feature. I’m browsing Twitter, while getting a notification from WhatsApp. Because the alert isn’t interactive, I have to tap it and the instant messaging app opens up on my screen. After I reply or finish reading the text, I can tap on “Back To Twitter”, displayed in the top-left corner of the screen and return to where I left off.

iOS 9 Back To Previous App Facts 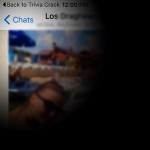 – The possibility to return to the precursory application remains for as long as you browse the app that generated the switch. For example if you receive a Messages notification while browsing Safari, you’ll be prompted with the “Back to Safari” button, even if you switch from the conversation that triggered the alert, to some other screen within Messages.
– This shortcut is also available if you navigate Safari and tap on a link that opens the Youtube app, for example. You can switch back to the stock Internet browser, easily when you finish watching the videos.
– As proven above, this short cut works for both native and third-party apps, as long as a secondary app causes your device’s screen to switch from your current application.
– This option works in a similar fashion with the Apple Watch app switcher shortcut. Pressing twice on the wearable’s Digital Crown, switches back to the previous app.

Tip: Check out how the new App Switcher works in iOS 9!