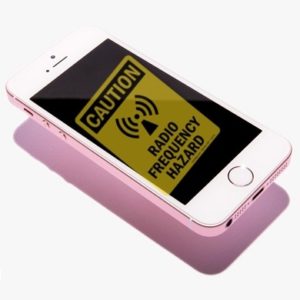 There is nothing more important than health. Although there is no medical study linking cancer or other illnesses with cell phone radiation exposure, it’s common sense that exposing your head and body to a source that’s bombarding your cells with electromagnetic radiation can’t bring any benefits. More, iPhones and other smartphones are new from the technological point of view. There is no study that shows how the human body compares to an exposure spread over tens of years. So, it’s quite important to check the SAR values emitted by your phone. No matter how low they are do your best to stay away from RF exposure as much as possible.

Although only marginal, iPhone SE’s SAR levels, when compared to the last two iPhone releases, the 6 and 6S models are higher. This isn’t something to brag about for Apple! iPhones are known to have always tended towards the higher end of the permitted Specific Absorption Rate limits, but the previous iOS phones released showed a tendency of reducing the radiation levels. However, the iPhone SE which was a premiere spring release, breaks a succession of two back-to-back iPhone releases that were manufactured with marginally lower SAR values.

iPhone SE SAR Values
According to the official Apple website, the iOS device released earlier this year, provides maximum exposure levels of 1.17 W/kg averaged over 1 gram of tissue, when iPhone is placed at head level, and between 1.17 – 1.19 W/kg when the device is held 5 mm away from the body. The difference is made because there are three different iPhone SE models, labeled: A1662, A1723, A1724. The only difference between them is the amount of LTE bands supported. All models work globally.

Fact: 1. The maximum accepted SAR value, by the FCC (Federal Communication Community) is 1.6 W/kg.
2. In Europe RF Exposure is averaged to 10 grams of tissue. This testing method is a little bit more inaccurate, because radiation spikes might be averaged when measured over a bigger sample. The iPhone SE SAR values for this second testing method are 0.72 – 0.97 W/kg when device is placed next to the head and 0.97 – 0.99 W/kg when positioning the iPhone 5mm away from the body.

iPhone SE vs Other iPhones SAR Value Comparison
Check the image provided below and you’ll be able to compare the iPhone SE SAR values to all other iPhone models released so far. Note, that every iPhone generation has several models. We took maximal values from each release. You can notice that the iPhone SE is the third most radiating phone after the 4S and 5C. 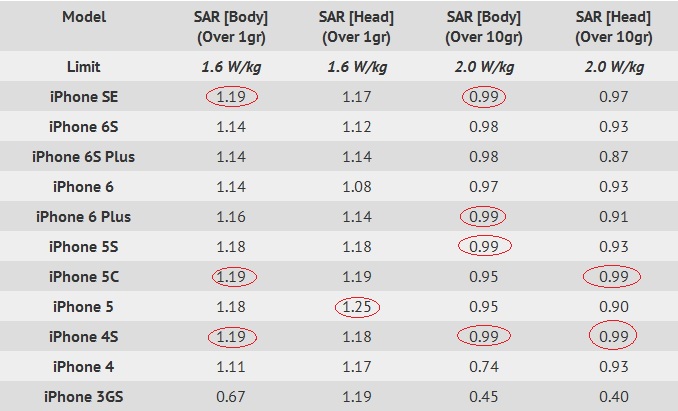 Conclusion: It seems that the more compact the iPhone case is the stronger it radiates. This could be an explanation why iPhone SE comes with higher SAR levels when compared to the 6 and 6S. In fact, its exposure is similar to the older iPhone models that have the same casing size. Squeezing more technology and powerful antenna hardware in a smaller case creates higher exposure concentrations.