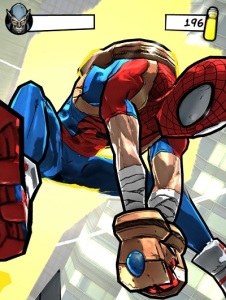 What about welcoming the first workday of the week with a review of a highly popular iPhone game. Do you fancy runners? I mean those video games that has a continuously moving character which has to be controlled between lines to collect coins (vials), avoid obstacles and fight villains?You’ll be delighted to find out more about Spider-Man Unlimited. A popular iOS video game provided by Paris residing developer, Gameloft. More good news, the software is available, on the App Store, free of charge for worldwide users.

Spider-Man Unlimited comes with various gameplay modes that should satisfy even the pretentious gamers. You can either play ‘The Story’ and complete missions, focus on scores and take part at ‘Events’, or play the ‘Unlimited Mode’, gain experience points and develop your character. You’ll also have the chance to build your own ‘Spidey Team’ and send it to complete various Ops. 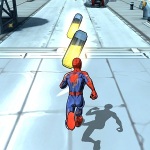 No matter what scenario you play controlling your Spider works the same. Your character is a continuous runner and your goal is to guide his path and collect resources, avoid obstacles and fight villains. As you can notice from nearby images the game is played, on your iPhone, in portrait mode. You can:
– Swipe right or left with your finger to move Spider-man between lanes.
– Swipe down to slide below obstacles and kick enemy soldiers with or without shields.
– Swipe up to avoid obstacles, jump on higher ground or kick Goblin’s soldiers.
– Double-tap and hold to swing and fly between buildings. Release to lose altitude.
– Tilt phone left or right to guide Spider-Man when climbing or sliding down a skyscraper wall. 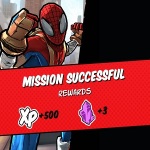 Gameloft has chosen to ‘equip’ this game with three different types of resources. I’m talking about Spidey Energy, which represents the amount of lives that you can play with. The default number of Energy units is 5. Every time you hit and obstacle, get beaten by a villain or fail of a building you die. At this point you have the option to continue your run, by reviving your Spider-Man, with the expense of ISO-8 units or lose a life and start over. Energy units are automatically refilled and you receive a new life every 5 minutes, or they can be purchased using real money. ISO-8 units are received after completing missions, when playing the story. The third resource is represented by vials, which are up for grabs during your character’s run. Vials are used for purchasing additional Spideys and for acquiring consumables like ‘Sensory Overload’ (increased point collection), ‘Web Gloves’ (brings invulnerability) and many others which provide additional power-ups. 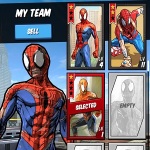 Spidey Team and Character Evolution
With every new run on the streets of New York your Spider-Man gains experience points which are used to increase its level and thus unlock additional missions. With enough vials you can add Spideys to your team. You can train each Spider-Man by choosing from your squad when starting a mission. You can even send your heroes to defend Manhattan’s streets while you’re not able to play. These are called ‘Spidey Ops’ and are an additional source of rewards. 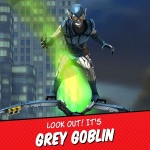 – Stay Alive: In the long term it’s better to opt for surviving a raid, than maximizing your resource collection. If you chase vials to the extreme, you increase your risk of hitting an obstacle, missing a jump or properly landing a swing.
– iSO 8 Spending: Carefully nurture this important resource. I mostly recommend spending these units for ‘Revivals’. This will help you continue a mission from the point you died, without losing initial progress. Depending on which rewards await for you at the end of the run, one or even two ‘Continues’ are worth investing in.
– Spidey Optimization: Built gameplay specific Spider-Men to maximize your efficiency when playing ‘Story’ missions, ‘Events’ or ‘Unlimited Mode’.
Expand Team Slots: your early goals while playing Spider-Man Ultimate is to increase the size of your squad. You should be directing your resources to portals that provide the option of calling new Spidey additions.
– Hurry Up: If you wish to accelerate your progress within the game, you can purchase additional iSO-8 units. However, do mind that you have to spend real cash for your virtual pleasures!