Perform Rapid Math Operations On Your Wrist With Moveo Calc 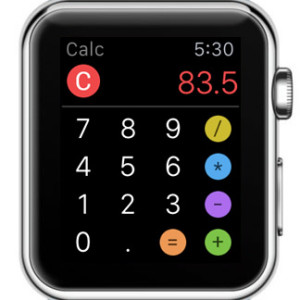 If you’re an Apple Watch owner, there is no need to grab your iPhone out of the pocket in order to perform some rapid math calculations, anymore. Even if watchOS, doesn’t feature a native Calculator app just yet, you can easily transform your wrist gadget into a number cruncher. One of the third party apps which provides this feature is Moveo Calc, provided by the company with the same name.

The developers aim to turn your Apple Watch into a simple to use calculator, for fast operations, on the go. Moveo Calc won’t transform your wrist-worn device into a scientific computer, but it will make sure that you’re able to quickly perform some rapid additions, subtractions, multiplications and divisions. If you would like to test it out please read on and follow the instructions. 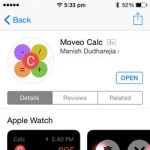 First, you have to install the software on your paired iOS device. Please grab Moveo Calc, for free, from the App Store and install it on your iPhone. When ready, open the Apple Watch app on your smartphone and browse the My Watch tab. Scroll all the way to the bottom until you find the new app listed alphabetically in the third party software list. Tap on its name and toggle the knob next to the Show App on Apple Watch setting. The Moveo Calc app icon is displayed a few moments later within the app bundle home screen on your wrist gadget.

How To Use Moveo Calc 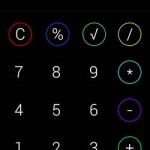 Performing operations on this third party calculator is very simple. The user interface is minimalistic. I won’t focus to0 much on explaining how it works on your iPhone, because it’s quite obvious once you have the app opened and displayed in front of your eyes. More, than that you’ll probably use the built-in iOS Calculator while performing math operations on your smartphone.

However, using the calculator on your Apple Watch is something new. First of all you have to know that because of the restrictions imposed by this first watchOS generation, using Moveo Calc when the wrist-worn device isn’t connected to its iPhone companion, is not possible. Standalone third party apps aren’t allowed yet, so basically your Watch will send and receive the app logic from the smartphone. 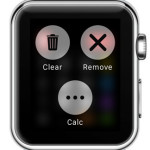 So, when you open Moveo Calc on your Watch, you’re directly opened with the calculator’s interface. There are three rows of numbers, plus a forth one containing “0”, “.” and “=”. The forth column accommodates the 4 basic math operations mentioned above. Next, you to act as you do with any other normal calculator. You should know that there is also a hidden menu available, called via Force Touch. When you press firmly on the Apple Watch screen, three options pop-up: Clear, Remove and Calc. The first one clears the screen and brings the calculator to 0. The second deletes one digit at a time, while the third brings you back to the calculator.

Moveo Calc Recommended Updates
After testing this app we detected a few things that could be improved in future versions:
– showing the selected operation, by displaying its symbol on the calculator’s display would be greatly appreciated, as the users can surly know when his input has been recognized by the calculator’s interface. At the moment it’s difficult to notice if your tap was registered, especially on the 38mm Apple Watch.
– a brief history of recent calculations would also be a good improvement.