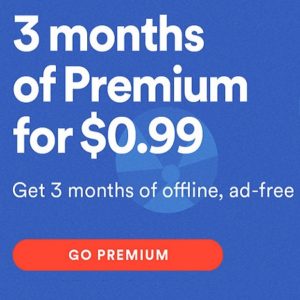 The two biggest music streaming platforms for mobile devices have launched promotional campaigns aimed to attract new and returning customers during the 2017 winter holidays. Spotify is currently the leader topping over 100 million active monthly users and is now offering a 3-months subscription for $0.99. Nevertheless, you have to be a first time user of the most popular music streaming service. If you already went for the 30-day free trial or had a subscription in the past, you aren’t eligible for the offer.

Fortunately, there is a second deal available which aims to bring back old subscribers that have left Spotify for Apple Music, or have simply stopped paying for the service, without switching for a competitor. This sale offers you the chance to grab a 3-month long subscription for $9.99 and you qualify for it if the last payment to Spotify was registered before October 21, 2017. All that you have to do is open Spotify and go to the the payments section.

Fact: If you want to gain access to the 30 million songs and more than 2 billion playlists hosted by Spotify, you have to grab this deal until December 31, 2017! More info here.

Apple Music is playing catch-up with the Swedish music streaming service and has also released its own deal for this time of the year. Apple is currently providing one extra month of trial, along the three months already included in the free testing period offered to its new users. This means that if you never tried Apple Music before you can now subscribe as a new user and get the first 4 months free. The 5th month will be automatically charged the standard $9.99 fee unless you’re not impressed with the service and decide to cancel.
How To: To can grab this deal via Groupon!
Info: There’s currently no Apple Music offer to bring back old customers. However, this hints that there are not many users that decide to cancel Apple Music once they decide to check it out!
Fact: Apple Music is available on devices running iOS ,macOS, tvOS, watchOS, Android and Windows. It provides access to 40 million songs!