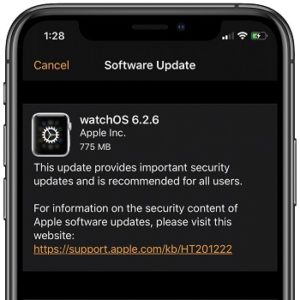 Shortly after the release of iOS 13.5.1, Apple has also rolled out watchOS 6.2.6 for the Apple Watch. It’s a similar minor update that includes only security fixes, according to the software update log displayed by the iOS companion app. The fix is related to the same vulnerability that allowed the hacker team behind the ‘unc0ver’ 5.0 tool to release a spectacular jailbreak opportunity, right after the release of iOS 13.5.

watchOS 6.2.6 is the ninth update to the 6th watchOS generation, that was released in the fall of 2019. You can update your Apple Watch over-the-air with the help of the paired iPhone. Just make sure that the Apple Watch is charged to at least 50% battery level. The device has to be connected to its charger and within range of the paired iPhone!

How To Update To watchOS 6.2.6
1. Open the Watch app on your iPhone.
2. In the My Watch tab (bottom-left corner of the screen) tap on General.
3. Open Software Update.
4. Tap Download and Install.
5. Provide iPhone Passcode and be patient until the new software is downloaded and installed on your Apple Watch.
Fact: watchOS 6.2.6 is compatible with Apple Watch Series 1 and later.

Troubleshoot: If the screen layout on your Apple Watch looks “minimized”, not displaying edge-to-edge, perform a restart and the problem should be fixed!

watchOS 6.2.6 Update Log
Apple informs in the update log that the new software comes with “important security updates and is recommended for all users”.
The security content of the update confirms the patch related to the security vulnerability exploited by the ‘unc0ver 5.0’ tool.

“Impact: An application may be able to execute arbitrary code with kernel privileges
Description: A memory consumption issue was addressed with improved memory handling.
CVE-2020-9859: unc0ver”

Are you happy with your Apple Watch? Let us know in the comments section available below.

Related: Check out the new Pride watch faces that came along watchOS 6.2.5.