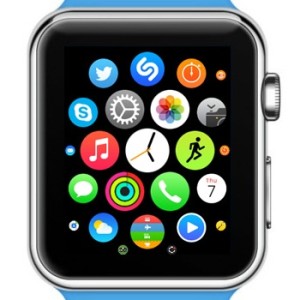 Your Apple Watch’s screen size, no matter if we talk about the 38 or 42 mm model, can’t be compared with the 4.0 inches (102 mm) available with the iPhone 5 series, or the impressive 4.7 inches (120 mm) provided by the iPhone 6. This is why it’s most important to efficiently organize the app icons on your home screen. Facilitate rapid access, whenever you need to open a new application.

Apple has surprised us, in a good way, with the already patented home screen Carousel App layout pattern. The app icons have a round shape and are glued to each other. A bubble magnet effect is created, with all app icons sticking one to the other, as if they would have magnetic properties. The app bundle can be dragged left, right, up or down using touch screen and zoomed in or out, by turning the Digital Crown.

How To Edit App Layout
The App Layout can be customized from the wrist gadget, or with the help of the Apple Watch app, available on your iPhone.
1. Using Watch OS
– Raise your wrist to wake up your smartwatch;
– Press the Digital Crown and open the home screen view;
– Tap & hold the app icon that you wish to move, until it starts shivering;
– Drag it to the new desired location and release;
– Repeat the process with another app or press the Digital Crown to exit the editing mode.

2. Via iOS
– Grab your iPhone and open the Apple Watch app;
– Go to My Watch and tap the very first option available on the screen: App Layout
– Tap, hold & drag the app icon to a new position. Repeat the process until you rearrange all icons the way you wish.
Sync: these edits will instantly sync on the Apple Watch, if the devices are Connected.

How To Organize Apps on the Apple Watch 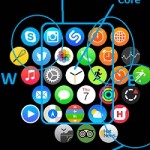 If apps start to pile up on your watch OS device, you need to efficiently organize them. If you keep it clean, life will seem less complicated. Here are a few hints that I use to rearrange icons on the home screen carousel view:
1. Near Core
Press the Digital Crown to open home screen. Now, notice the app icon available in the center of the view (Watch Face is the default and can’t be edited). That’s the most important position on the carousel layout. If you turn the digital crown to zoom in, you’re able to open the app, without touching the display.
Most important, the core of the carousel, is ground zero for rearranging your apps. All the important icons should be dragged and dropped around the centered icon. This trick facilitates easy access to your most frequent used watch OS applications, without needing to navigate the app bundle, in any direction.
2. Mind Glances
I assume that you’re already familiar with Apple Watch glances. Some of the apps allow you to implement summaries available in the glance menu. This means that those applications are a single swipe up away from your Watch Face. While viewing a glance you can tap it to open the full app.
What I want to underline is that you can avoid dragging the icons of the apps that support glances near to the core of the app layout, because you already have an easy way of accessing them.
3. Category Grouping
Next up, you should group icons considering categories. This way it will be easier to remember in which area of the screen a certain app is. For example you can bring all message related apps together. Other category classifications could be Fitness, News, Social media, Games and so on.
4. Cardinal Points
For the category placing to make even more sense, use the four cardinal points. Start from the core and surround it with the most important apps until you fill the default view of the home screen. Next, add groups and memorize their location by assigning cardinal points. For example, you can place Fitness in the North area; Games southbound, Social media West and messaging East. Additional categories can go north-east, south-east, south-west and north-west.
5. Compact Bundle
Las but not least it’s important to maintain the app layout as compact as possible. I’ve seen examples of users building branches and other spectacular shapes, but that isn’t efficient at all, because it increases the dragging area.

How To Hide An App 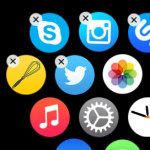 When you decide to ditch some applications because your home screen is too stuffed, you have two options:
A. Open the Apple Watch app on your iPhone, switch to the My Watch view and scroll for the list with the installed apps. Tap on the name of an app that you don’t need anymore and now hit the “Show App on Apple Watch” setting to stop displaying it on your wrist gadget.
B. Light up your smartwatch and open home screen view. Tap & hold the icon of the app that you plan to hide until the bubbles start to shiver. Now, hit the “x” available in the top-left corner of the icon. Confirm deletion and you’re done. This command removes the application only from your Watch. It remains available on your paired iPhone and also in the installed apps list, within the Apple Watch app on the iOS device!

Tip: Of course that the native watch OS apps can’t be hidden or removed.

Ask Siri For Help
In case you’re in a rush or doing something else and can’t ransack your home screen, to open the needed app, you can use the Apple Watch virtual assistant. Raise your wrist and speak “Hey Siri!”…immediately followed by… “open [app name]”!