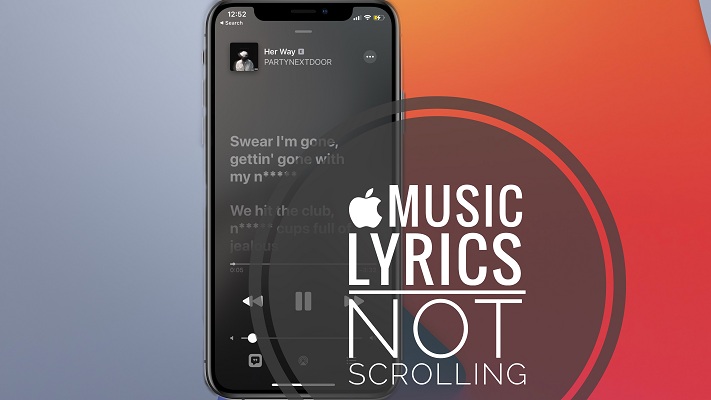 Are Apple Music Lyrics not scrolling on your iPhone or iPad? You’re not the only one. Apparently, an iOS 14.3 bug has found its way up to the Release Candidate version and if nothing changes, it will be also included in the public release. Thankfully, only a small number of songs are affected!

The Apple Music Lyrics bug is not allowing users to scroll for the lyrics of a track. Swiping for verses is unresponsive, and you have to be patient for the lyrics to play out as the song progresses, in order to reach the part that you’re looking for. Curiously, this happens only for a small number of specific tracks and the same songs are bugging for everyone.

For example, I can play ‘Born in the U.S.A’ (Bruce Springsteen) and swipe trough the lyrics back and forth without any problems, but a song like ‘Her Way’ (Partynextdoor) won’t allow me to scroll the verses.

I’m not sure if this bug is iOS 14.3 related or Apple Music related but most songs in my library aren’t affected. I’ve tried force closing Apple Music and rebooting iPhone but it doesn’t help. This must be something Apple Music server-side related. What do you think?
Fix: The only workaround that I could find to get to the end of the lyrcis faster is to fast forward the entire song by using the progress bar available at the bottom of the screen. However, this way you skip playback too!

How To Show Lyrics In Apple Music

If you’ve never used the Apple Music Lyrics feature before you should know that you can easily display the verses of a song by tapping the track name. On the songs screen, below the album’s artwork and the playback controls, you can find the Lyrics icon (bottom-left corner). Tap it and the verses are displayed on the screen. They’re automatically scrolling as the song is played out.

Not all tracks available in Apple Music are served with the lyrics option. If the Lyrics icon is grayed out for a a specific song, it means that verses aren’t support. This is often the case when you’re listening to a remix, or to a reinterpreted (remastered) composition.

Have you also encountered unscrollable lyrics in Apple Music? For which track? Use the comments section and share it with us! Do you have a fix, don’t hesitate to mention it and we will share it with everyone!