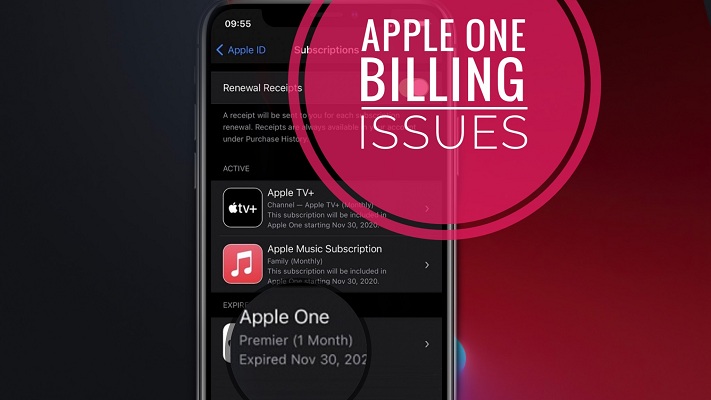 The good thing is that you’re not the only one, and these Apple One billing issues will most likely be solved without too much hassle. However, before you start complaining please make sure that you fully understand how the Apple One free trial works and what happens when the free membership converts into a standard one after 30 days elapse.

Has Apple billed you individually for services that are included in the Apple One bundle, although your free 30-day trial of the Individual, Family or Premier plan hasn’t lapsed yet?

Be aware that the free Apple One membership doesn’t include free access to services that you were already subscribed with. Those services will become part of Apple One only after the trial period.

In case you have a running Apple Music subscription that exceeds the Apple One launch, you will get a refund. Else, you’ will be still charged, but get your money back afterwards, if you decide to continue with Apple One.

How Apple One Billing Works

Outcome: In this case the Apple One free membership will grant you 30 days of Apple TV+, Apple News+ and additional iCloud storage (according to the chose plan), on top of what you already have.

Important: After the Apple One trial ends, you will be charged according to the chosen plan. You will also get a partial refund for the above mentioned services that you only used individually for various time frames until the standard Apple One subscription kicked in!

Then after your trial is up you’ll be billed whatever plan of Apple One you chose minus a prorated refund of the above services that you got a partial month for.

Have you been automatically charged twice or even more times by Apple for the Apple One subscription? This has been reported to happen when using PayPal as payment processor. Don’t worry though, you will be refunded for the double, triple and even quadruple payments.
The only inconvenient is that it will take up to 30-days for the money to show up back into your account.

Some users are reporting that their Apple One subscription is showing as expired, although they’ve been billed.
Others claim that the payment appears as refunded although the balance hasn’t been credited to their Wallett app.
In most cases the services continue to work, which means that this is only a minor display bug that should be easily fixed by Apple, while in other situations the access to the subscribed services is also unavailable, alongside with the expired status.

What’s your situation? Are you also encountering problems with the Apple One subscription renewal, or better said transition from free trial to standard paid membership? Share your feedback using the comments section.

Update: Reader Chris has just mailed us and reported that his credit card was charged twice for Apple One renewal. This makes double charging possible even for those that aren’t using PayPal as payment gateway!

Related: For an in-depth look at the available Apple Ones plans, check out this article.