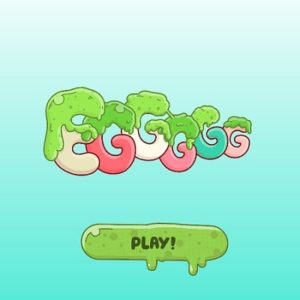 Who would imagine that a game based around vomit would become so popular among iOS users. Eggggg is an one of a kind puzzler for kids and grownups. Help Gilbert find his way to a friend’s birthday party, after escaping from his mean aunt Doris. The “problem” is that your character has a huge allergy to eggs, which make him vomit like a fountain, whenever he eats them.

Use this “health condition” in your advantage and propel Gilbert to impressive leaps whenever he vomits. Survive the attack of mean cyborg chickens and make it to the party. You have to pass 21 levels of crazy vomiting action. Hyper Games has developed this app for both iPhone and iPad. Eggggg also comes with an iMessage app and can be fully played offline. Grab it now, during the Free App of the Week promotion and save $2.99. 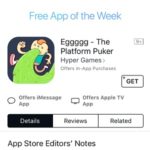 Tap the nearby image or this link to open the game’s official App Store download page. Tap GET, followed by INSTALL to download the software. Be patient until it’s deployed on your device. Tap OPEN, when available and start your virtual vomit adventure.
The game requires your iPhone and iPad to run iOS 9.1 or later. It occupies 365 MB of storage space and includes support for numerous languages including English, French, Spanish, German, Italian, Spanish, Japanese and many others.
Fact: If instead of the GET label, you see the $2.99 price tag, it means that the promo has ended and you have to purchase the software at retail price.

How To Play: Gilbert’s controls are tailored for touch devices. The game is played in landscape mode. Tap on the right half of the screen to make your character run forwards and on the other side to turn back. Directions might switch when depending on the puzzle.