How To Close Apps On iPhone XS, XS Max And XR 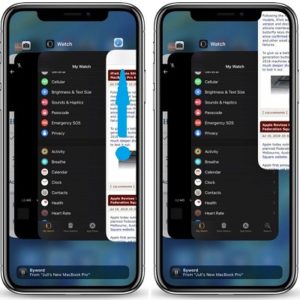 How to force close apps on iPhone XS Max.

In iOS whenever you exit an app to return to the Home screen or to switch to another screen, the exited application remains opened in the background and accessible from the App Switcher panel. If the Background app refresh setting is turned ON, the software in question also retrieves and sends data while in standby mode. Apple has confirmed several times that iOS prefers to manage apps for you.

Many users prefer to close apps from the App Switcher view in order to prevent additional battery drainage. However, depending on how often you use the app, it might be more power efficient if you just let iOS handle it, as recommended by Apple, instead of manually closing the software after each use. The general consensus is to only force quit apps that you don’t use daily. The app closing procedure has changed a couple of times in the recent past. Read on to find out how this works in iOS 12!

How To Force Close Apps In iOS 12
If you’re a new iPhone XS, XS Max or XR user here is what you have to do in order to kill apps that are lingering in the background:
1. Swipe-up from the Gesture bar, which is available, centered, at the bottom of the screen. Pause before you lift your finger in order to open the App Switcher. You can find here three variations of this gesture!
2. Apps available in the background should be listed on your screen with the help of an array of cards. Swipe-left/right to select the app that you want to close.
3. Swipe-up the card that you want to close. That’s it, the app in question has now been permanently closed.
Fact: iOS 11 had this a bit more complicated for iPhone X users. There was an additional touch and hold needed on the card to make it available for deletion by unveiling a red “minus-icon”. However, that was just an useless extra step and Apple has decided to return to the classic app closing gesture, in iOS 12 for both the 2018 iPhone lineup as well as for the older iPhone models, the X included!

Why Would I Force Close An App
Although battery saving isn’t such a big deal you still might be needed to kill and app and open it back, whenever you want to force restart the software. This is helpful if the application acts unresponsive, freezes or experiences some kind of glitch that prevents it from working properly. Rebooting it is the first troubleshooting option. That’s followed by an entire iOS force restart, achieved with a complete iPhone reboot and so on.

Related: Learn how to perform a print screen on the iPhone XS, XS Max and XR.