How To Install iOS 11.2.5 Beta 1 On Any Compatible iPhone And iPad 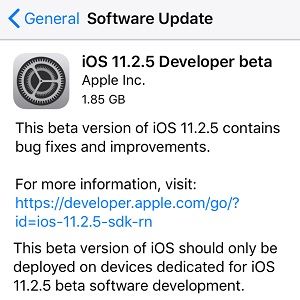 After rolling out iOS 11.2.1 with a fix for the HomeKit remote sharing issue, Apple has also started seeding another Beta testing stage. It’s not iOS 11.3 as you might have thought, but a smaller upcoming upgrade labeled iOS 11.2.5. We can only assume that the Cupertino-based tech giant has jumped to this version, in order to keep the iOS 11.2.2, iOS 11.2.3 and iOS 11.2.4 denominations reserved if any other unexpected bug surfaces, that requires a software updated before iOS 11.2.5 is ready to be released. This makes sense, considering the amount of glitches that have required fixes since the launch of iOS 11.

iOS 11.2.5 Beta 1 is currently only available to registered Apple Developers. Nevertheless, there is a trick that you can apply and install this test version on any compatible iPhone and iPad even if you don’t own a Developer account. All that you have to do is follow the info available below.

How To Install iOS 11.2.5 Beta 1
Important: Please perform a full iTunes backup of your iOS device before proceeding!
A. Registered Developers
If you’re an active iOS Developer you probably already know that you have to log-in to your account and install the iOS 11 Beta Configuration Profile on your iPhone or iPad. Reboot your device, for the changes to take effect, open Settings -> General -> Software Update and install iOS 11.2.5 Beta 1 on your device.

B. Non-iOS Developers
1. If you’re not a Developer and neither plan to become one, you can install the iOS 11.2.5 Beta on your device as long as you install the iOS Configuration Profile from a third party source available here.
2. Pick the device that you want to grab the Beta Profil for and tap on Install, available in the top-right corner. Provide the device’s Passcode, Agree with Apple’s terms. Also agree to restart your iPhone or iPad when ready.
3. After the reboot browse for Settings -> General -> Software Update.
4. Tap on Download and Install and allow your device to upgrade to iOS 11.2.5 Beta 1!

Fact: Because iOS 11.2.5 is a small software update we don’t expect too many visible changes. Our staff is currently testing out this first test version and we will update you as soon as new features or significant changes have been detected.