How To Pre-Order Apps And Games From The App Store 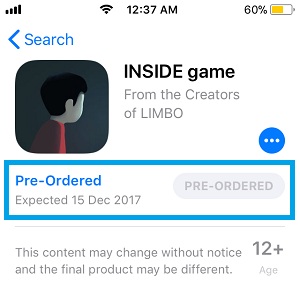 Apple has recently added a new option for App Store software developers allowing them to provide upcoming apps for pre-order. This means that you can now “book” a download in advance and have the software installed on your iPhone, iPad, Mac, Apple TV and more when the app is released! Both Paid and Free apps and games qualify for this new retail option which allows developer to market their software even before the launch.

Apps available for pre-order are accompanied by the “Pre-Order” label and an approximate Release Date. These details are displayed just be low the software’s icon, in the App Store, as show in the nearby screenshot. To qualify for the Pre-Order selling mode iOS apps have to launch in the upcoming 2 – 90 days from the start of the pre-sales period.

How To Make Apps Available For Pre-Orders In App Store
If you’re an iOS developer and want to list your upcoming app for pre-orders follow these steps:
1. Open iTunes Connect on your Mac computer.
2. Click on My Apps select the app in questions and go for Pricing and Availability available in the left column.
Fact: The Pre-Orders section is displayed if your app has never been live on the App Store.
3. Pick the “Make available for pre-order” option and select the planned Release Date.
4. Click Save in the top-right corner.
5. Submit your application for review.
6. After you receive Apple’s approval, return to the Pricing and Availability menu, confirm the app’s release date and click on “Release as Pre-Order”, available in the top-right corner.

How To Pre-Order An App Store App 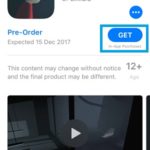 As soon as you reach the App Store page of an application that’s available for pre-order here is what you have to do:
1. Tap on GET if the app is free, else hit the app’s price tag.
2. Use Touch ID or Face ID to authenticate the pre-order.
3. The “Pre-Ordered” status is displayed instead of the “Open” button that is usually available after an app is downloaded and installed on your iPhone or iPad.
Fact: Pre-Ordered apps will be automatically downloaded to your iOS device when they’re released by their developers.

Tip: Want to test the new Pre-Order App Store feature yourself? Go ahead with the Gorogoa ($4.99) and Inside game (FREE).