How To Receive And Send iMessages From An Android Smartphone 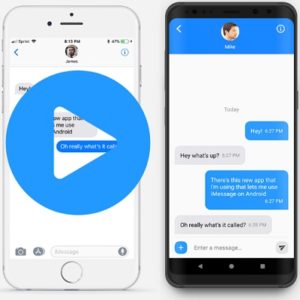 How to send and receive iMessages on an Android smartphone.

The iMessage system is an iOS, macOS and watchOS exclusive instant messaging feature, allowing Apple customers to chat, play, send Animoji and even pay money to their iOS customers, free of charge, with the help of the new Apple Pay Cash feature. Android has failed to replicate a similar service for Samsung, Google Pixel and other Android-based smartphone owners, which currently rely on cross-platform messaging apps like WhatsApp, Facebook Messenger, Viber or Skype to chat free of charge with their contacts.

Nevertheless, a young developer seems to have scored a breakthrough and coded the weMessage Android app that, brings iMessage compatibility to non-iOS users. However, there is a significant requirement for this trick to work. The Samsung, Google Pixel or other non-iPhone users have to own a Mac in order to be able to receive iMessages and re-rout them to their Android smartphone. The Apple computer, requires the “weServer” software to be installed, in order to act as a bridge between the iOS and Android platforms.

How To Set Up iMessage On Android
1. Download and install the weServer software on a Mac.
Fact: weServer requires Java to be installed on your Mac computer. Use the video embedded below for a step by step tutorial:

Important: There are high chances for this app to be pulled from the Google Play store. Apple wants to maintain the iMessaging system iOS exclusive and will likely file a report against the “weMessage” app. Hurry up and install it asap and make your Android smartphone iMessage compatible!

Fact: weMessage brings the full iMessage functionality to Android. You are able to initiate Group Chats, send attachments, get read receipts, benefit from advanced encryption and much more!