How to turn off iPhone without Power button.

Starting with iOS 11, iPhone and iPad users have a second option of shutting down their devices. Now, you can power them off without pressing and holding the Power button. It’s not a feature that you will use too often, because smartphones and tablets are designed to run 24/7, but if the situation arises it’s good to know that there is a software solution for turning off your iOS device, without the need of the physical button.

Perhaps your Sleep/Wake button malfunctions, or you aren’t able to press & hold it. Or, who knows, after the elimination of the physical Home button, in the iPhone X, Apple might attempt to ditch other buttons in the future too. Read on and find out how you can power of your iPhone without pressing the Power Button. Surprisingly, Siri isn’t able to shutdown your device yet. But this option could be added in the near future! 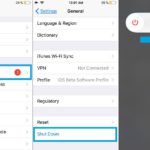 Turn Off iPhone From Settings
1. Open the Settings app on your iPhone / iPad running iOS 11 or newer.
2. Tap on General and scroll all the way down.
3. Tap on the Shut Down label.
4. The “slide to power off” screen appears. Slide it from left to right to turn off your iOS device. Obviously, tap Cancel if you reconsider.

How To Turn On Your iPhone Without Using The Power Button
Tip: Connect your iOS device to a wall outlet or computer, with the help of the Lightning cable. iOS will automatically power on your device when charging begins. Provide your Passcode and your iPhone / iPad is good to go!