How To Use Siri When iPhone Is Offline 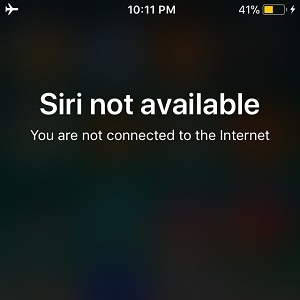 The iPhone’s virtual assistant is very helpful when you want to use the iOS features hands-free. However, it’s conditioned by a permanent Internet connection, because Siri uses information located on Apple’s server to research its answers and perform the requested actions. However, starting with iOS 11.2 the iPhone’s assistant is also available when the gadget is offline.

All beginnings are difficult and Siri with no Internet access makes no difference. Currently it can handle only very few and basic commands. Nevertheless, the snowball has started rolling and the feature can only expand in the near future, especially when its main rival, the Google Assistant can handle similar requests without accessing the web, since about a year already!

Using Siri When iPhone Is Offline
So, if your iOS device is in Airplane Mode, you can invoke and use the virtual assistant as long as you know which voice commands are supported when no Internet is available. Siri currently is only able to handle music playback. Use the following keywords: “Play”, “Pause”, “Next song”, “Previous song” and “Repeat music”. Don’t attempt to alter them in any way, because you’ll get the “Siri not available. You are not connected to the Internet” prompt.
Fact: Considering that all voice commands currently supported by Siri when iPhone is offline are music playback related, we can assume that Apple has added them as support for easier AirPods control. This way you don’t have to actually grab your iPhone in order to control music playback on the revolutionary wireless Earbuds.

Related: Do you know how to invoke Siri on the iPhone X?

3 Responses to How To Use Siri When iPhone Is Offline