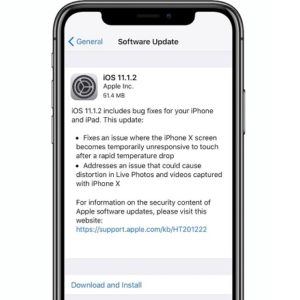 Apple has just released another minor software update which focuses on two main issues which arose on the iPhone X. However, even if the release notes detail two fixes for the 10th anniversary iPhone, iOS 11.1.2 is available for download on all iOS 11 compatible devices. More, exactly on 41 iPhone, iPad and iPod touch versions. The build number is 15B202 and the new firmware is available for update over-the-air in the Settings app.

iOS 11.1.2 comes exactly one week after the release of iOS 11.1.1 and two weeks after the roll-out of iOS 11.1. Two months have passed since the official release of iOS 11 and this is the 6th upgrade that fine tunes the 11th iOS generation. iOS 11.2 beta testing is ongoing and we expect the 2nd major upgrade to hit before the end of 2017.

iOS 11.1.2 Fixes
Two significant bugs are fixed by this new firmware:
1. The unresponsive iPhone X touchscreen when the device is suddenly exposed to cold.
Fact: This problem became public last week and we’ve informed you that Apple is working on an fix!
2. A glitch that could cause distortion in Live Photos and Videos taken with the iPhone X.