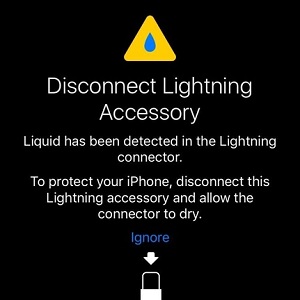 While beta testing iOS 10, we’ve bumped over a new iPhone warning screen, most probably introduced by Apple in this new version. It’s called Disconnect Lightning Accessory and has the role to warn an iPhone user that water or any other type of liquid has been detected in the Lightning Connector.

The recommendation is to stop the charging process, by unplugging the connector and dry out the accessory before attempting to resume the charge. This prevents the iPhone from receiving water damage.

Until the 10th generation, iOS was only able to warn its user when an iPhone is nearing critical operation limits while exposed to extreme temperatures. In such a case your iPhone will let you know that it needs to warmup, if it’s exposed in freezing conditions and vice-versa. 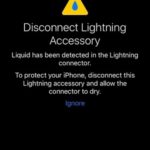 How iOS 10 Water Detection Works
Apple hasn’t explained how this warning is triggered. Based on common sense, there are two ways. Either the iPhones already own a liquid sensor that hasn’t been made public yet (used only to void guarantees in case of water damage); or the software is looking for short-circuits / low resistance between the connector’s pins. Either way this is a welcomed addition.

How To Act During a Water Detection Warning
If your lightning detector is connected to a power source, remove it immediately. It’s much more safer to unplug from the power source first and then remove the cable from the iPhone’s lightning connector. Wipe the cable clean and allow your iPhone’s connector to dry out, before attempting to charge the device again. If the fluid isn’t water you have to wipe it out carefully, before allowing it to dry.

Fact: The introduction of this water damage prevention screen points out that the Cupertino-based tech giant might be working on a waterproof iPhone. Will the 7 model bring the breakthrough or do we have to wait until 2017?